Welcome Back: Managing AMD After a Lapse in Care From COVID 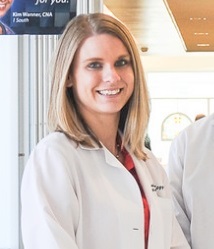 Amanda Legge, OD, of Wyomissing Optometric Center in Wyomissing, Pennsylvania, is grateful that her practice was an early adopter of dark adaptation technology nearly six years ago, providing a simple way to help detect age-related macular degeneration (AMD) in patients earlier than ever before. The AdaptDx from MacuLogix is a functional testing device that has been shown in clinical trials to identify patients with the earliest stages of AMD—even when they have no other structural signs of AMD. Being able to manage these patients and follow them has been an important part of her practice.

Now that Dr. Legge is using the AdaptDx ProTM, a second-generation dark adaptometer with a self-contained wearable headset, patients have told her that it’s an easier test. The AdaptDx Pro requires no dark room or external computer and features an artificial intelligence-driven onboard technician named Theia™. After the in-office technician selects the testing protocol and places the device on the patient’s head, Theia takes over to facilitate a reliable, consistent testing experience by using automated instructions and adaptive feedback spoken directly to the patient. 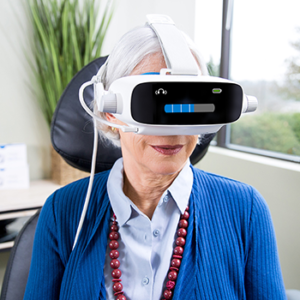 The COVID-19 pandemic has, however, made management of these patients more difficult. As an essential business, the practice never fully closed. But office hours were limited to just four days per week for only emergency patients and those with high-risk medical diagnoses. While that includes her AMD patients, many of these are older patients who elected to defer their visits rather than come in every two-to-six months for a dilated exam and appropriate testing, including a review of the structure and function at each visit. “Thankfully, we saw very few AMD patients convert to choroidal neovascular membranes (CNVM) over the shutdown period of COVID-19. Many patients were delayed longer than their recommended dilated exam intervals, and some progressed,” she says. Those who did immediately were referred to a retinologist and have all begun intravitreal injections.

What she was able to do was continue to educate patients, a key step at every stage of AMD. “My patients with intermediate or worse AMD are recommended AREDS2 supplements and educated on the importance of healthy lifestyle, including diet and exercise, and control of co-morbid conditions,” she says.

When she was able to see patients, she did send reports to their primary care physician, emphasizing how co-morbidities, if not well-controlled, can contribute to worsening disease condition and vision loss.

The practice continues to operate at a lower patient capacity, in order to maintain safety protocols. “Testing and exam frequencies remain the same, prioritizing those patients that are at high risk for conversion to CNVM or are progressing in their disease,” she says. For the small number of patients who do not yet feel comfortable or who are at high risk for COVID morbidity, she is trying to accommodate that so that there is not a lapse in preventive AMD care. “My patients understand that if conversion to wet AMD occurs, early intervention is the best way to preserve vision,” she says.

To increase their comfort level, she has set aside exam times at the start and end of each day, when there are fewer people in the office. “A few patients who are still uncomfortable to be seen in person were re-educated on the use of their Amsler Grid, or Foresee Home device, and importance of daily monocular monitoring for changes with the hopes of scheduling them in office as soon as possible for routine care,” she says. If they ever have concerns, she assured them that they would be fit into the schedule that day. The added benefit of using a head-mounted device with a built-in AI technician during the pandemic is that the technician can be socially distanced during the test to reduce exposure.

With early AMD patients, education is critically important; they often are still able to read 20/20 and cannot detect any vision loss, other than a common decline in night vision. Fundus photography and OCT are important but dark adaptation can show how the disease is already impairing their everyday life, Dr. Legge says.

These patients are generally considered low risk for progression to CNVM and were rescheduled until the practice reopened for more exams. Even so, all of these patients were called and asked if they noticed any change to their vision or had any specific complaints before they were simply rescheduled. “If anyone was experiencing vision changes, they were still seen same or next day for an emergency examination,” she says.

Dr. Legge identifies AMD suspects much as she does glaucoma suspects: by family history, presence of drusen/RPE disturbances and night vision complaints. These at-risk patients have dark adaptation performed typically once per year, as this is the earliest indicator of conversion to true AMD, even subclinical AMD, she says. “So with patients at risk, I can use the AdaptDx Pro to help make the AMD diagnosis, and then it becomes is my primary means of monitoring for progression. If anatomic changes such as drusen or RPE disturbances are present, then this is photodocumented for baseline, as well as OCT, to monitor microscopic structural changes.”

As the practice routine gets back to a more traditional pace, Dr. Legge appreciates the capability to offer this important testing so efficiently. The earlier she can identify patients and introduce them to interventions that can help them preserve their vision, the better.

Big Change Is a Small Choice