Replicate a Model That Works 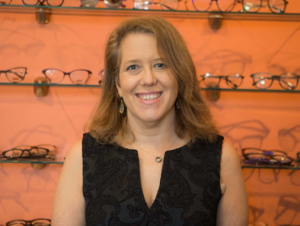 Dora Sudarsky, OD, had been considering the right time to equip a second exam room at her practice, Chroma Optics, in Burlington, Vermont. Her son will be graduating from optometry school in May 2021 and will join her in the office, so she knew the change was on the horizon. “I knew I needed to add another lane, and with COVID, I decided now was the time to do it,” Dr. Sudarsky says. She added a second TRS system from Marco as well as the ION slit lamp earlier this year, and working between two systems is allowing her to be more efficient seeing patients. She can alternate from room to room, which leaves more time for cleaning between each visitor. “It’s been awesome.”

TECHNOLOGY IS A TOP PRIORITY

Dr. Sudarsky opened the practice in 2015, renovating and redesigning the space that was a former video store. She did most of the interior design and decorating herself to allot more of her funds to her instrumentation. Marco was on her wishlist from the start, and she opened her doors with one TRS system and the OPD III in her pretesting area. “The OPD III was above and beyond what anybody else had, and that was a big appeal,” she recalls.

Many patients followed Dr. Sudarsky from the optical where she had previously offered her optometry services, and in that space, she did not have any advanced technology. So the impression on patients has been huge and continues to be when new patients come to her office. “They tell me they’ve never seen so much technology, and while it may not all be brand-new, not every eye care practitioners embraces it the way that I have.” She recalls as she was preparing to open the practice that a colleague told her to wait and add automated refraction technology in five years. “I wanted to have it now so patients would tell their friends; that word of mouth makes a huge difference,” she says. “Some people say that they can’t afford to do it, but I say you can’t afford not to.”

BENEFITS FOR PATIENTS AND PRACTICE

Dr. Sudarsky says the staff adapted well to learning how to use the technology from Marco, and the data transfers automatically to her exam rooms so she can discuss the results with patients. “One of the things I love about the TRS system is that it’s a lot easier on my body—doctors don’t always think about that,” she says of the repetitive movement of traditional refracting. After experience her new, upgraded TRS in the second exam lane, Dr. Sudarsky is a fan of the improvements Marco has made, such as a bigger touch screen and even more intuitive software. It’s easier for her, but the experience is also simplified for patients. “Being able to press a button and show their old prescription vs. new prescription has a big impact, and I do think it has helped with upgrading and updating eyeglasses,” she adds.

The new ION Slit lamp in her exam room has become a great patient education tool in just a few months. “I can take pictures, put them on my computer screen and share with the patients.” Dr. Sudarsky was recently recommending a switch to wear daily disposable contact lenses to a patient. “I was trying to convince her, and with the picture, I could show her that her current contact lenses were dirty, even when she said they were clean. A picture is worth a thousand words.”

The OPD III has been a great asset for fitting contact lenses, and in particular, multifocal contact lenses. “It has a lot of great tools,” Dr. Sudarsky says. “I can tell if the patient’s visual axis is not the same as the center of the pupil, and I will know if multifocal contact lenses will work for them or not.” That can save her and the patient some frustration, especially compared to a system where she may have tried multiple lenses before reaching this conclusion.

Dr. Sudarsky says her efficiency has improved working with this technology, and she’s able to spend more time with each patient. “I have fewer remakes and better refractions,” she says. “I wonder how I practiced before it.”

Dr. Sudarsky didn’t know any colleagues who had technology from Marco when she took the leap, so she’s relied on the support of its team who have helped her with any question or issue that arises. She’s particularly thankful to her Marco support representative, who is a master at the OPD III and who helped Dr. Sudarsky understand how to utilize the many features and functions that the instrumentation has to offer. “They are just a text away and always willing to help,” she says.

In any industry, it can be advantageous to stay updated with the latest technology and patient care procedure in order to stand out amongst...
Read more
Marco: Diagnostic Solutions

ODs Share Their Secret to a Long-standing Practice: Automated Technology

Kim Eng, OD, and Wendy Lim, OD, have been husband and wife partners in practice for more than 25 years. With more than 600...
Read more
- Advertisment -

“Here’s What Your Child Sees”