All of Her Focus Is on the Patient in the Chair 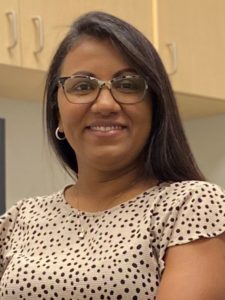 Fazeela Karim, OD, recalls that like for every optometry student more than a decade ago, the prevailing advice she received was to go into private practice. Dr. Karim had initial experience with corporate practice, as she began her working life as a receptionist for a JCPenney-based optometry practice. A doctor there encouraged her interest, and when that doctor later opened her own practice, Dr. Karim started working with her; first as a receptionist, then tech, eventually covering every position.

In Dr. Karim’s last year of her rotation, the two doctors purchased an existing practice together, which began to thrive. “It ran well, we complemented each other,” she says. In addition to working there, Dr. Karim also filled in at corporate locations—and the focus on patient care solely was appealing.

Unfortunately, the two doctors were not exempt from the havoc wrought by the 2008 financial recession. “Things got harder and harder,” she says. “Instead of enjoying seeing my patients and running a practice, I was constantly thinking about how we were going to cover our costs… the stress became too much.” Dr. Karim and her partner ended up selling the practice, and she moved to Georgia to start anew.

“I knew nothing about America’s Best Contacts & Eyeglasses and the National Vision doctor network,” she says, so she approached the recruiter three months before her move to learn more. She liked what she heard, and in 2009, she joined Doctor’s Exchange of Georgia, P.C., an independent practice with offices located inside America’s Best, covering several locations. While she notes that the Practice has become more doctor-friendly in recent years, she saw the number of doctors in the system thriving even with the high patient volumes at the time and knew she could do it, too.

Dr. Karim says she is a bit frustrated by the preexisting misconceptions about corporate optometry and especially how National Vision, Inc. and its affiliated independent practices have been operating in recent years. “It’s almost an entirely different experience for ODs joining the Practice now,” she says.

Once Dr. Karim decided she was ready to return to practice in Florida, the relocation process with the recruiter moved quickly and smoothly. Within four weeks of that contact to express her interest, she was working at a new store and office, employed by Crystal Clear Eye Associates of Florida, P.A. Soon after, she was asked to become an Area Doctor. “It was one of the smartest things I could have done. I’m extremely happy,” she says.  She enjoys the mentoring and leadership that comes with the role, and delights in being able to provide ODs new to her practice with a high level of support.

“I say that all the time: I wish I had this level of support when I joined,” she says. “I get a lot of new grads, and they look to us for guidance. I wish I had someone mentoring me through the process when I was their age. But the Area Doctor program is just another way that shows all of the work that has been done in the last ten years to be more doctor-friendly.” Dr. Karim says her experience is a little different from what many optometrists today face. She worked in various settings and positions, learning the ins and outs of all areas of the business. “Many of the grads today go straight from high school to undergrad to optometry school and then to the workforce,” she says. “Many don’t know the industry and they need guidance to adjust from student to practicing OD. I am happy to help them in their journey.”

BELIEVING IN THE MISSION

One of the greatest misconceptions Dr. Karim battles against is that there is a difference in quality of patient care from private practice to corporate. There is not. “I do the same testing, I refer out the same way,” she says. “I try to encourage doctors to work in an environment where they feel like they have control over the patient experience.”

Having owned a practice through a difficult economic climate, Dr. Karim says that she felt particularly blessed not to have to take on the worries and stress that 2020 brought. “I enjoy the fact that I can go home and not have to worry about it, have a guaranteed paycheck– when you have a young family—this was a blessing. That private practice dream became more of a distant memory.”

That means that she can focus exclusively on her patients, which is at the very heart of being in the profession. “The majority of patients who come in, come in for accessible and affordable eye care. They see an amazing doctor, and they return for that doctor,” she says. “We are the gateway into health care.” She and the optical staff are familiar with the ins and outs of helping patients navigate their insurance to best serve them. “Patients need a way into the system, but many don’t know what that is. They only know their eyes hurt or their vision isn’t as good as it was,” she says. “So, we guide them where they need to go next. We can connect them to someone who takes their medical insurance.” She saw that firsthand when her office and America’s Best location was one of the first to reopen after COVID-19 temporary closings. Patients had delayed their eye care and sometimes their health care, and she and the optical staff were often the providers who helped them get back on track.

Dr. Karim is not alone in her feeling of fulfillment from working in an accessible health care system. Many ODs and providers feel similar, but her feelings leave her satisfied and knowing she is making a difference. “Even after a stressful day, I’m very happy [with] where I am.”

Eager to Return to Providing Access to Eye Care

Optometrists Are the True Entryway to a Health Care System for...