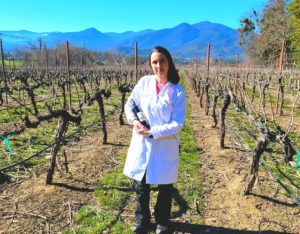 For Amy Walport, OD, there was little time for rest after her graduation from Southern California College of Optometry. Dr. Walport immediately found two part-time jobs in private practices around southern California. “I’d do all kinds of fill-in work just because I could…I was all over the place.” After working for two years at a LASIK and cataract center, Dr. Walport received an advertising postcard from a recruiter for the National Vision Doctor of Optometry network, looking for optometrists to join a practice in her home state of Oregon. With a desire to expand her family and return home, Dr. Walport began the process of moving and starting the next leg of her career.

Dr. Walport works for Doctor’s Exchange of Oregon, P.C. and practices at an office located inside an America’s Best Contacts & Eyeglasses in Medford, Oregon. “At first, I was a little put off by the idea of working in a corporate location because I did not have the best experiences in some of the others I had worked in, but after I talked with Doctor’s Exchange representatives, I thought it was great.” Dr. Walport speaks highly of the independence that she has in her practice. “I like that I’m not required to sell [products]. I’m there to take care of my patients. The optical, which is run completely separate, also doesn’t push products or expensive upgrades on my patients who visit them after. They leave with what is best for their individual needs.” That’s particularly important because so many of her patients have never visited an eye care provider, either because they felt no urgency to do so or they worried they would be unable to afford treatment.

Occasionally, some of these patients have sight- or even life-threatening conditions revealed during the exam that they might not have known about. For example, just two days before Thanksgiving 2017, Dr. Walport had a patient come in who, initially seeking a new prescription for her contacts, had a massive glioblastoma. When Dr. Walport noticed nerve swelling during testing, she recommended the patient go to the ER as soon as possible, where she was flown out to Portland that night for surgery to remove the brain tumor. “How much an eye exam can tell about health is amazing,” Dr. Walport often tells her patients. 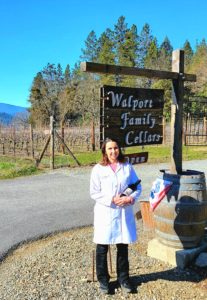 When not at the office, Dr. Walport has another venture that keeps her and her husband busy. The region of Applegate Valley is both a childhood home to the two of them and an up-and-coming region for wine. After teasing the idea of owning a winery for many years, the couple saw that a 35-acre property became available, and they jumped on the opportunity. Now, Walport Family Cellars is an established part of the Applegate Valley wine scene, with Dr. Walport working in the tasting room on Sunday afternoons. “We have five or six varietals of wine. The region is known for its bold reds, and we also have a few white blends.”

Like her practice of optometry, Dr. Walport has the support of colleagues but the independence to make her own decisions. “We work with experienced wine crushers who are mentoring us, but ultimately we choose what goes in each wine that carries our label.”

“I feel very content with where I am right now and am happy that postcard landed in my mailbox. My practice here in Oregon allows me to do what I love, both professionally and personally.”

Priya Kaura, OD, came to the U.S. from Canada with one goal: providing eye care in places where it is not easily accessible. The...
Read more
National Vision: Corporate OD Careers

Finding Her Fit in a Corporate Setting

Tina Bui, OD, never imagined herself working for a corporate-affiliated practice while she was a student at SUNY College of Optometry. “The focus was private...
Read more
- Advertisment -