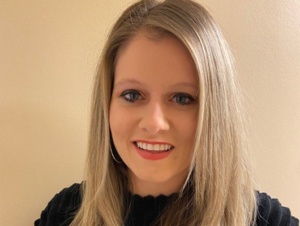 Angelika Pacholek, OD, already felt right at home in an America’s Best Contacts & Eyeglasses by the time she chose her externship locations. As a college student, she went to America’s Best for her own exams, contact lenses and eyeglasses, and she learned even more about National Vision and its retail brands in her time at Illinois College of Optometry. When it came to choosing externship sites, America’s Best recently had been added to the list of externship opportunities. “For my fourth year, I was looking for externships that would provide me the widest range of experiences,” says Dr. Pacholek. She focused on private practices and VA hospitals and wanted to save her final rotation slot for a corporate optometry location closer to home. “That was the America’s Best in Algonquin, Illinois,” she says.

“It was my favorite learning experience by far. My preceptor, Ian Ymalay, OD, was a great mentor,” she says. Dr. Ymalay, a 14-year veteran of America’s Best, was an influential figure for the recent graduate. “He likes the company and has been there for a long time,” she says. Her relationship with Dr. Ymalay only grew when he proved himself to be an excellent teacher as well as mentor. “Dr. Ymalay would say, ‘Okay, that’s good. I might have done it this way…’ He was always supportive, never dismissive,” says Dr. Pacholek. That guidance gave her great confidence, she says.

America’s Best in general provided the most student-doctor-friendly experience she had. “At America’s Best, I was expected to be a doctor only. At some sites, I was expected to be a technician and doctor or even only fill the role of technician if the doctor I was working with was backed up,” she says. “At America’s Best, I could focus more on the patient and gain the experience I needed. Because of that, I feel like I was more prepared.”

As the end of her externship grew near, Dr. Ymalay asked Dr. Pacholek what her plans were and began to call around on her behalf. What he found was a brand new store opening in Orland Park, Illinois. He advised her that it would likely be a slower pace to start at a brand new location, a situation that could benefit her as a new OD. “It was great for me, not just only as a new graduate still gaining confidence but also because it was a new store that I could help mold. I had the chance to set things up my way instead of coming into a place where I had to fit into the existing structure,” she says.

EASING IN WITH BRAND NEW LOCATION

Since Dr. Pacholek began with the new office in August 2020 after graduating, she has been enjoying the schedule, pacing and building relationships with patients and staff. In an actively affordable model such as America’s Best, Dr. Pacholek directly sees the impact she is able to have.

“I ask patients, ‘When was your most recent eye exam?’ and they often say, ‘Five or 10 years ago,” she says. “They go a long time between visits because of barriers—financial or often simply lack of access. But we provide great primary care, and I have a great group of colleagues I can refer to.” In fact, she sees that as an important role of hers as patients who may need additional medical or eye care services may not know where to turn. She has a network of ODs and others to whom she can trustingly refer her patients to.

There are undoubtedly some standout memories from Dr. Pacholek’s time so far in her practice environment. She recalls a patient who came in for an eye exam to update her contacts, but when Dr. Pacholek noticed some unusual findings, she pursued answers through retinal imaging. “I said, ‘I think your optic nerve is swollen; you need to go to the ER from here.’ I didn’t want to be alarmist, but I did say there are some serious causes for the swelling. It was textbook bilateral papilledema,” she says. “The patient came back a few weeks later and said, ‘I was hoping you’d be here. I wasn’t going to go to the ER, but you talked me into it, and they said you may have saved my vision.’”

To new ODs and soon-to-be graduates, Dr. Pacholek—who is now an Ambassador for National Vision—urges consideration of America’s Best for their externships and careers. “National Vision provides a great support system,” she says. “At the beginning, I was nervous. I sometimes felt like I didn’t believe in my own ability, and if I wasn’t sure, I knew that I could reach out to an experienced colleague and double check. I have support that I’m doing the right thing. National Vision listens to its doctor network and I am grateful for that.”

OD Prioritizes Attentive Care for Herself and Her Patients

It’s easy to spot a workplace where employees are unhappy. Whether she was working in private practice or corporate locations, Mary Fazelian, OD, has...
Read more
National Vision: Corporate OD Careers

Second-Gen OD Carves Her Own Path

National Vision, Inc. presents career opportunities she had not anticipated Jennifer Lo, OD, grew up in southern California and has been around the optometric world...
Read more
National Vision: Corporate OD Careers

OD Prioritizes Attentive Care for Herself and Her Patients

Optometrists Are the True Entryway to a Health Care System for...