There is increasing diversity among optometry school graduating classes – not just based on gender. This chart shows the percentage of graduates by ethnicity, compared to the census bureau numbers showing population by demographic. 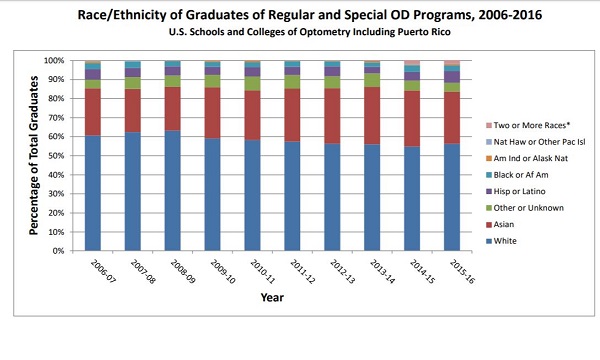 This chart comes from the ASCO Student Data Report 2016-17 that shows the change in ethnicity of optometry school grads in the U.S. and Puerto Rico over a 10-year span.

Kathy Tran remembers being told by a store clerk while shopping for sunglasses, “They don’t really make glasses for ‘your type of face.’” Even...
Read more
- Advertisment -

The Centers for Disease Control and Prevention (CDC) issued a Health Alert Network advisory on Feb. 1, after 55 people in 12 states reported...
Read more

Optometry needs representative leadership. Listen as SECO leaders talk about their professional goals in advance of the 100th anniversary of SECO.
Read more

A recent WO Poll asked readers a simple question: are you a “yes” person or a “no” person? When presented with a new opportunity or...
Read more
Load more

The Front of the Class

The Allergan Foundation Donates $2 Million to Community Organizations on Front...