The percentage of women entering North America’s optometry schools and colleges remains high. For the 10 years between 2006 and 2015, women, on average, accounted for 65.5 percent of first-year enrollments. In the seven years since, the average has risen to 69.3 percent.

Only one college—University of Pikeville-Kentucky College of Optometry—had fewer than 50 percent females in its entering class of first-year students this fall.

The chart below takes a look at the trend of percentage of women in optometry school classes since WO began reporting this data in 2006. That first year only included the U.S. schools and colleges of optometry, however, each year since analyzed ALL North American traditional optometry programs including Canada and Puerto Rico.

The enrolling class this year, the class of 2026, had 70 percent female students, dropping down just slightly from last year’s 71 percent. 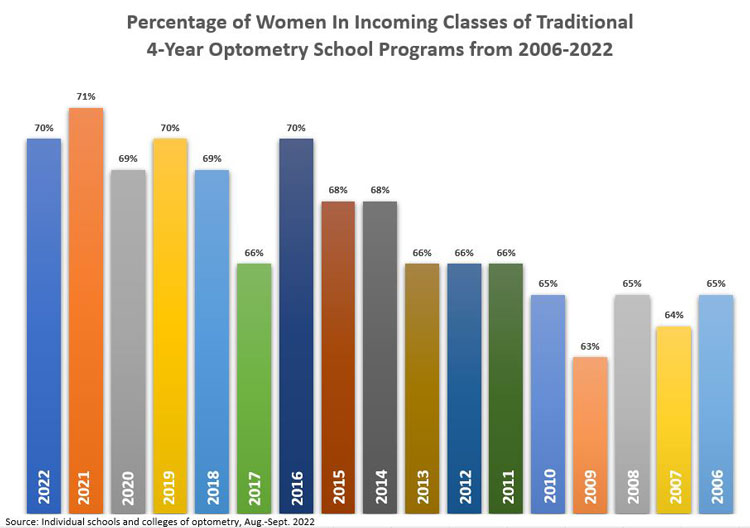 In 2022, women represented more than 45 percent of the practicing ODs.

Click here to view the class of 2026 enrollment statistics.

World Sight Day is quickly approaching, and there are plenty of ways to get involved! October 13 will be dedicated to raising awareness and promoting...
Read more
News

Woo U to Donate Proceeds From Weekend’s CE Event to Scholarship to Honor Dr. Art Epstein

August 2022 Was Better Than August 2021, But ECPs Still Catching up to Pre-COVID-19 Levels

In this 30th wave of research that Jobson Research has been conducting since the start of the COVID-19 pandemic, inflation and staffing issues seem...
Read more
- Advertisment -

One of the ongoing challenges for optometric practices is finding and retaining staff. When offices are short-staffed or staff members need to be trained...
Read more

For years, Patricia Ward Adams, OD, has been counting on ABB Optical Group to bring convenience and reliability to her contact lens business. Several...
Read more

For the past five years, Southern California designer Trina Turk and her “optimistic fashion” inspired by the architecture, landscape and mix of California, has...
Read more

World Sight Day is quickly approaching, and there are plenty of ways to get involved! October 13 will be dedicated to raising awareness and promoting...
Read more
Load more