Home News Most ECPs Are Keeping Their Masks Handy
News

Most ECPs Are Keeping Their Masks Handy

More than three-quarters, 78 percent, of respondents to Wave 30 of the Jobson Optical Research Coronavirus ECP survey said that someone who works at their location has gotten COVID-19. The survey was answered between April 8-12, and this percentage has been trending upward but was slightly lower than the March 2022 response of 80 percent.

Perhaps that’s why so many indicate that they’re going to continue wearing masks.

For the first time in this wave, respondents were asked about their mask-wearing habits outside of the optical. The majority, 55 percent, said that they keep a mask in their pocket/purse in case they’re asked to wear one and 34 percent said they always wear a mask in indoor public spaces. Eleven percent said they don’t carry a mask with them. Half of the respondents said that regulations in their area still require masks to be worn in medical offices and facilities. 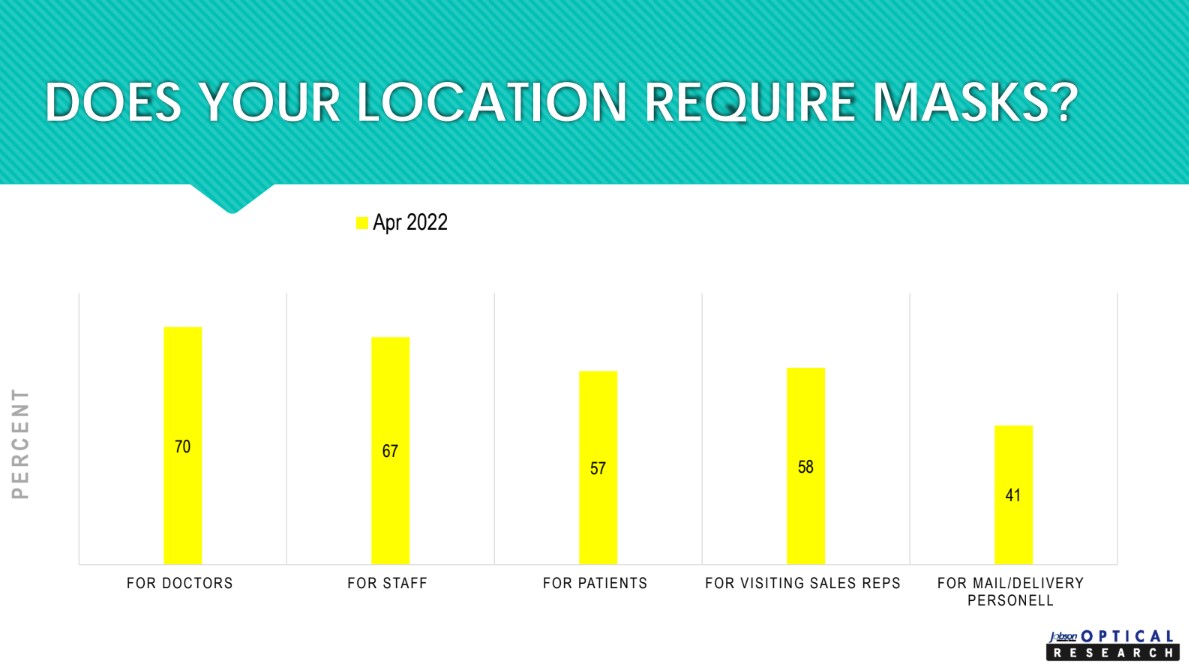 Indeed, 70 percent of respondents said that masks are required for doctors and 67 percent said they’re required for staff. A majority even require them for patients (57 percent) and visiting sales representatives (58 percent).

A majority of respondents said that they are likely to continue wearing a mask in the exam room even if government requirements are lifted. 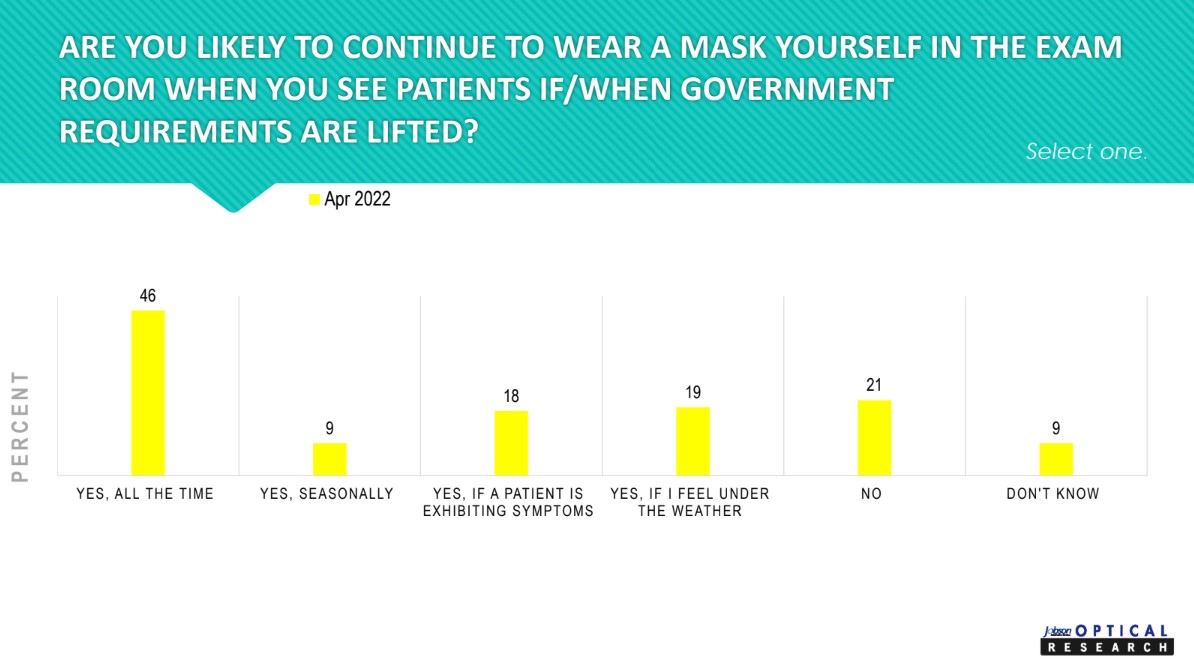 This graph shows that nearly half, 46 percent, expect to do so all the time and others identified circumstances where they would. 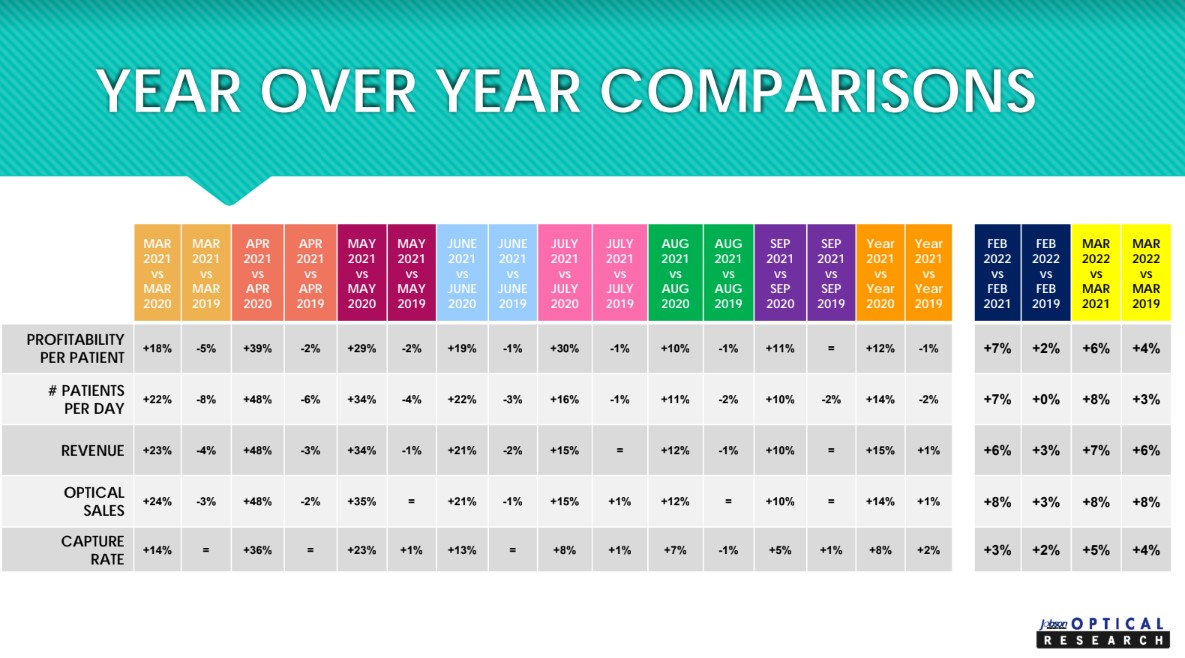 Supply chain issues continue, with 56 percent saying their offices are experiencing delays. That’s down from 63 percent in March. The delay is most apparent in frames, with 76 percent, the highest percentage yet saying products are delayed. Zyl and metal frames are most affected, as are frame deliveries that originate in China. A majority of respondents, 61 percent, said that they believe patients are willing to wait two weeks for the frames they chose. 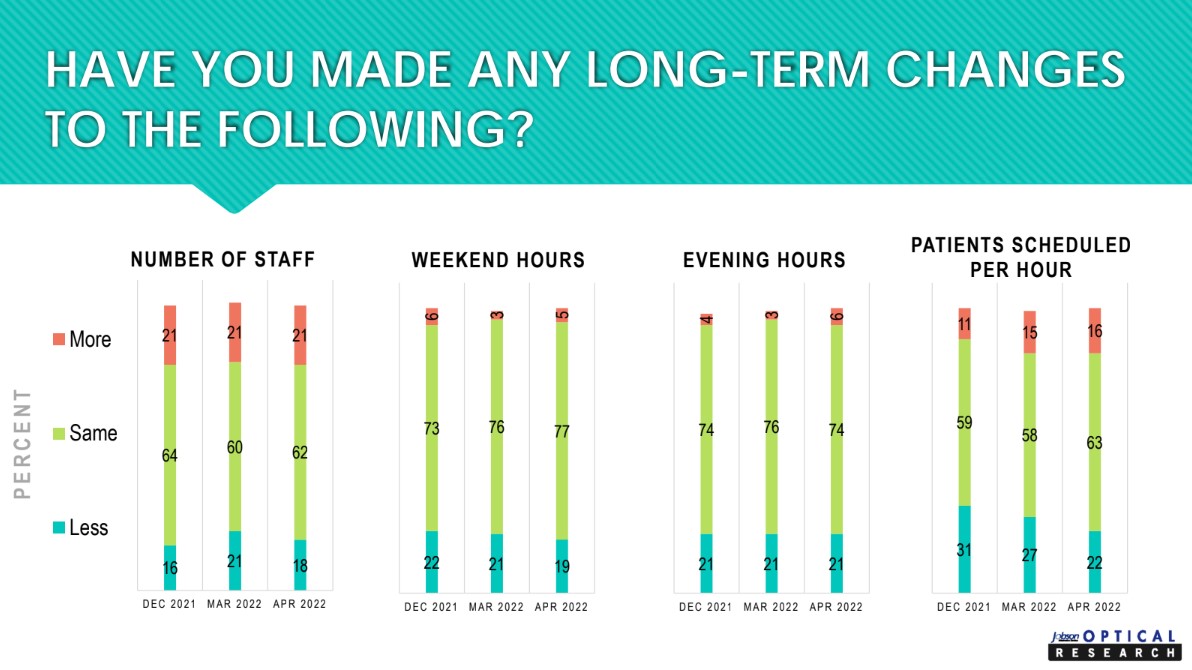 This graph shows how practices have adjusted their staffing or hours of operation for the long term.

Mark Miller, the creator of a new app called Eye Docs Now, has taken his 53 years of experience in the optical business to...
Read more
Alcon

Alcon Volunteers Strengthen Communities Across the Globe with Alcon in Action

On May 19, 2022, thousands of Alcon associates from 45 locations around the world participated in Alcon in Action (AiA), an annual company-wide day of community...
Read more
Alcon