Home News Most Survey Respondents Said They Are Ending 2020 With Lower Revenues and...
News

The year 2020 ended much the same as it had limped along for the last half of the year, said respondents to the 18th wave of the Jobson Optical Research coronavirus survey, which was open from December 21-31, 2020. Patient volume per day in December 2020 was lower than in the same period in 2019, said 58 percent of the respondents. Only 15 percent said their daily patient volume was higher in late December 2020 than in the one before.

Profitability was down in 2020 compared to 2019, said 43 percent of respondents in the survey. However, 24 percent said their profitability was up in late December 2020 compared to the same period in 2019. Overall optical sales were lower said 51 percent of the respondents, while 22 percent said optical sales were higher. Respondents said revenue for this period was 76 percent on average compared to the year before. That’s the highest it’s been since this question was added in mid-September. In other surveys, it has ranged between 72 percent and 74 percent.

Most practitioners don’t anticipate the patient volume will change dramatically over the next 30 days 50 percent said it will stay the same, with a quarter of respondents saying they expect a decrease and a quarter saying they anticipate an increase.

RATES RISING IN COMMUNITY AND PRACTICES

COVID-19 infection rates have been on the increase, said 71 percent of respondents. In fact 50 percent said that businesses in their area have been required to close because of COVID-19-related illnesses.

Forty-two percent of respondents, the highest percentage yet, said that someone who works at their location has gotten COVID-19. In the November Jobson Optical Research survey, that number was 33 percent, and in October, it was 22 percent.

Most respondents said that they expect to continue some safety protocols beyond COVID-19: 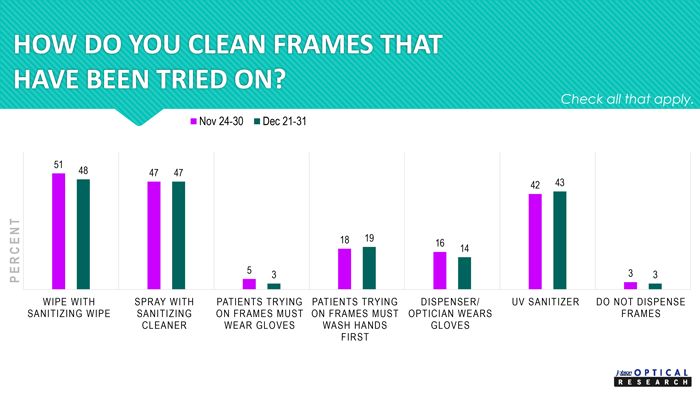 In this survey, 73 percent of respondents say that they’ve noticed more patients having issues due to increased screen time. Most say that they are seeing this with both adults and children. Respondents said that an average of 80 percent of their eyeglasses-wearing patients complain about lenses fogging up when they wear a mask.

Many also say that COVID-19 has changed certain industry practices, with 55 percent noting the change in virtual/in-person meetings. Continuing education and trade shows will also be changed forever, say 54 percent and 46 percent, respectively. 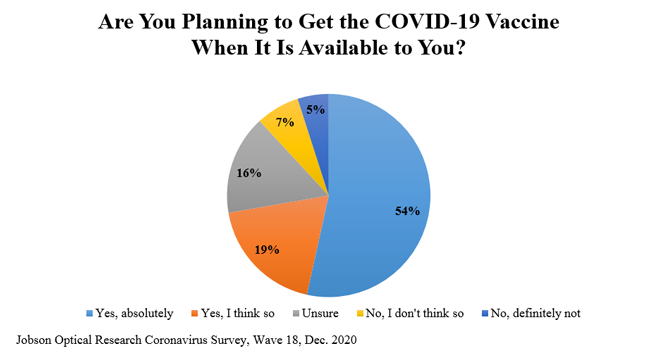 Most respondents said that they are planning to get the vaccine when it becomes available. Those who are not planning to get it say that they don’t think it’s safe (52 percent), don’t consider themselves high risk (31 percent) or have already had COVID-19 (14 percent). Eighty-five percent of respondents said that the availability of the vaccine is either very important or somewhat important to full business recovery.

Most respondents, 72 percent, said that they will encourage all staff to be immunized, but there is less support at this point for ODs administering the vaccines. Only 37 percent said that they would like to see that and only 24 percent are aware of initiatives to advocate for that. Respondents are split in how the vaccine may impact their decision on attending live industry events.

Read the full results here in a report that includes questions on staffing, telehealth, patient practices and volume, sales data and more.

Also read the result of a late December 2020 WO Pop-up Poll on ECP views on the COVID-19 vaccine.

In the eyes of the employee, eye care professionals (ECPs) are expected to educate them on their vision insurance plan’s benefits—according to the 2022...
Read more
Leaders

Women In Optometry regularly recognizes the accomplishments of women ODs in the profession and in their communities. Have you stepped into a new leadership role...
Read more
New

NOTE: New vendors are being added as we learn about them. Some vendors are offering special deals to WO readers. Check back often! Women In Optometry...
Read more
- Advertisment -