More than 230 million kids around the world under the age of 15 lack access to the eyeglasses they need. To make a positive impact on kids’ eye health globally, Nickelodeon International’s “Together for Good” and OneSight, a leading global vision nonprofit dedicated to reaching the 1.1 billion people globally who lack access to eye care, today announced their partnership on a new, multiterritory and multiplatform pro-social campaign, Framing the Future. 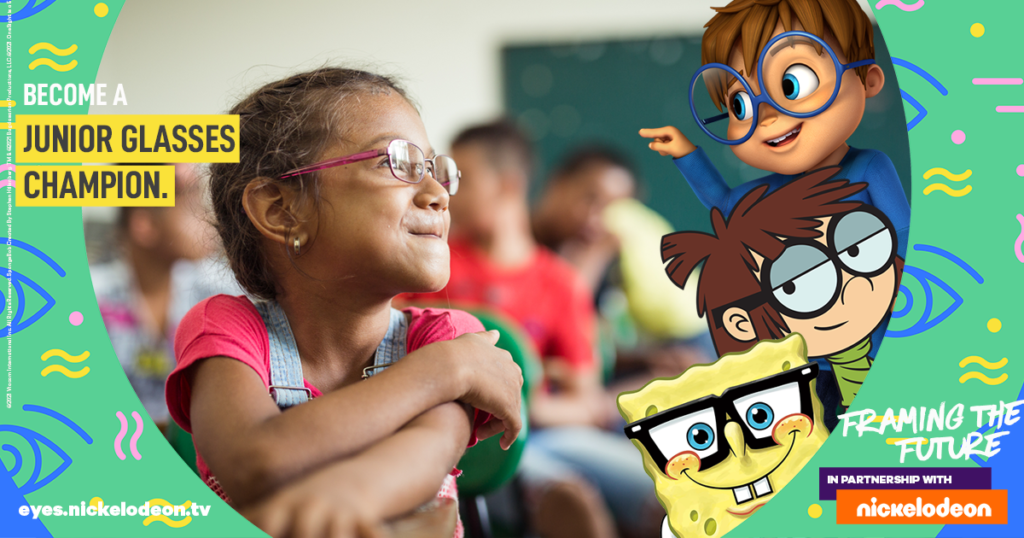 The program launched on Aug. 1 and culminates on World Sight Day, October 14. The Framing The Future campaign will educate kids and families on the importance of eye health, clear vision and access to vision care on a global scale, through multiproperty programming, original short form and digital content.

Broadcasting to more than 67 million households in 69 territories across the U.K., Australia, New Zealand, South Africa, Southeast Asia, Latin America and Brazil, the campaign encourages empathy, action and advocacy, by highlighting solutions in a mission to help kids who can’t see clearly, get the eyeglasses they need to learn more and live better. The campaign will be supported by a digital hub, also accessible in the U.S. among other regions, where kids can pledge to take a few small actions such as protecting their eyes from the sun and taking breaks from their devices. These actions will result in their commitment to being Junior Glasses Champions, advocating for healthy eyes and clear vision for all. The digital hub will also contain quizzes, polls, activity sheets, eye charts, videos and facts and resources on eye health.

The network will also air a 3-hour Eye Spy Toons programming marathon in August, showcasing episodes featuring Nickelodeon’s spectacled characters from SpongeBob SquarePants, The Loud House and ALVINNN!!! And The Chipmunks. Viewers will be challenged to find and count the number of characters wearing eyeglasses, while factoids about eye health pop up during the marathon.

“Research indicates that 30 percent of students around the world are unable to live up to their learning potential because they cannot see clearly in the classroom,” says Jules Borkent, executive vice president, Kids & Family, ViacomCBS Networks International. “As millions of kids worldwide prepare to go back to school, Together for Good’s partnership with OneSight aims to encourage families to think about their own vision care needs by harnessing the power of storytelling and our global brand to educate and advocate for a more inclusive world.”

“Kids are able to learn up to twice as much when they have the glasses they need, but they don’t always realize they have a vision problem,” said K-T Overbey, president and executive director, OneSight. “Through our Together for Good partnership with Nickelodeon International, we seek to educate kids on the importance of routine eye exams, caring for their eyes, and encouraging others who may need glasses. We welcome families to join OneSight in our mission to bring vision care to the 1.1 billion people globally who lack access.”

Viewers will be encouraged to interact with the campaign on social media using #FramingTheFuture to join others in this important vision movement.

Established in 2015, Together For Good is Nickelodeon International’s platform to inspire and empower its kid audiences to get involved in their communities and make positive changes in the world around them. Nickelodeon believes that kids have a voice, can improve their communities, create an inclusive world and make a difference in their future. Previous Together For Good campaigns have been in partnership with various nonprofit organizations such as Plan International, Citizens of the Great Barrier Reef, African Wildlife Foundation and Kids’ Rights, tackling such issues as gender equity and ocean and wildlife conservation.

Women In Optometry regularly recognizes the accomplishments of women ODs in the profession and in their communities. Have you stepped into a new leadership role...
Read more
News

The percentage of women entering North America’s optometry schools and colleges continues to rise. Even so, in 2021, women represented about 45 percent of...
Read more
New

The percentage of women entering North American schools and colleges of optometry for the fall of 2021 has increased to 71 percent, compared to...
Read more
- Advertisment -

Create a CE Course: An Opportunity to Educate Others and Yourself

By Carissa Dunphy, ABOC As an optician, I’ve had the opportunity to work with and become comfortable using a variety of digital measuring devices. The...
Read more

While the past 18 months have been challenging and painful for health care workers, the general lack of control everyone felt was met with...
Read more

By Rasa Tamulavichus, OD There is an emphasis in health care today on preventive medicine and wellness. When patients come to my practice, they have...
Read more