Home News Open, But Not Quite Business as Usual
News

Open, But Not Quite Business as Usual

The latest survey results from Jobson Optical Research into trends and attitudes about COVID-19 show that eye care businesses look to be regaining some of their footing. In this wave, which ran from Sept. 18-22, 2020, 96 percent of locations are open—and the majority of those not currently open, expected to be. Of those that have opened, 72 percent of respondents said they are back to normal hours of operation. Twenty-four percent said they are open reduced hours, and four percent said they have expanded their hours. 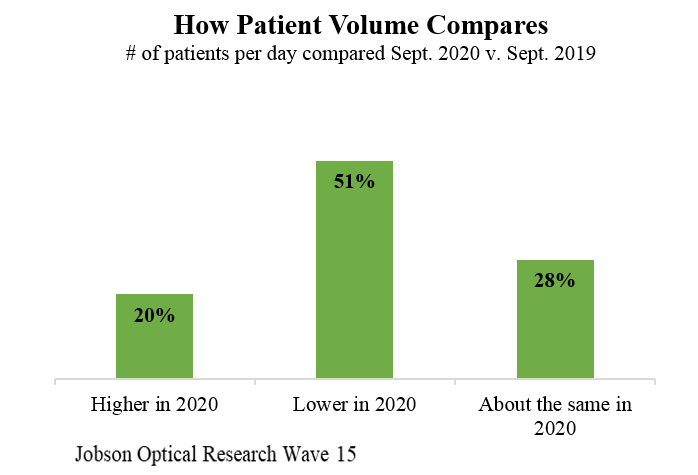 On average, respondents said they are capturing about 74 percent of the revenue they captured during the same week in 2019. A majority note that patient volume is down, compared to this period last year, but profitability seems to be recovering more quickly than volume. 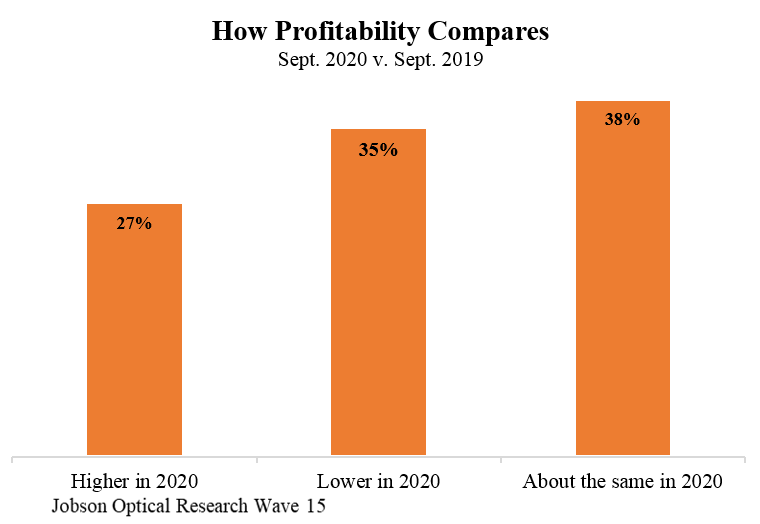 Eighteen percent of respondents say that someone at the workplace has tested positive or gotten COVID-19; that’s up from 16 percent during the Wave 14 survey, which was taken between Aug. 21 and 27. More respondents said that they have a plan n place to notify patients about possible exposure to COVID-19 (81 percent in Wave 15, compared to 78 percent in Wave 14). Most practices also remain diligent about screening staff and patients.

SOME STAFF NOT RETURNING

Twenty-nine percent of respondents said that at least some staff members have elected not to return to work.

Here are the reasons respondents cite for staff not returning.

According to responses in wave 16 of the coronavirus ECP survey from Jobson Optical Research, the percentage of practices having first-hand experience with COVID-19 infections is increasing.
Read more
New

The State of Women In Optometry 2020

A new report from Women In Optometry was recently released and is now available for download.
Read more
Events

Please enjoy the 2020 virtual award ceremony for the Theia Awards of Excellence! https://youtu.be/ZFen4A0PjOY The following video was played leading up the 2020 event, recognizing the...
Read more
- Advertisment -

According to responses in wave 16 of the coronavirus ECP survey from Jobson Optical Research, the percentage of practices having first-hand experience with COVID-19 infections is increasing.
Read more

The majority of respondents to a recent Women In Optometry Pop-Up Poll on practice culture stated that their office culture is awesome, and that it lives up to its mission when serving patients.
Read more

You can hear and feel the enthusiasm and passion that Judy Nguyen Thunnissen, OD, has for her practice Bella Eye Care Optometry. It’s evident...
Read more

Is Halloween Losing Its Luster?

In a recent Women In Optometry Pop-up Poll, about half of the respondents said that they will continue decorating their offices as they traditionally have for Halloween this year.
Read more
Load more