Staff and patient concerns are increasing; more cancellations, closings and interest in telehealth

A second Jobson Optical Research survey on COVID-19 shows how quickly and dramatically views and actions are changing in eye care offices throughout the country. The largest changes in preventive steps being taken in optometric offices, according to the second survey, is that far more practices are limiting the number of people allowed in the office at one time. During the March 18-19 survey, 69 percent of respondents said they were taking that step. Just days before, in the March 13-16 survey, only 24 percent were taking that step. 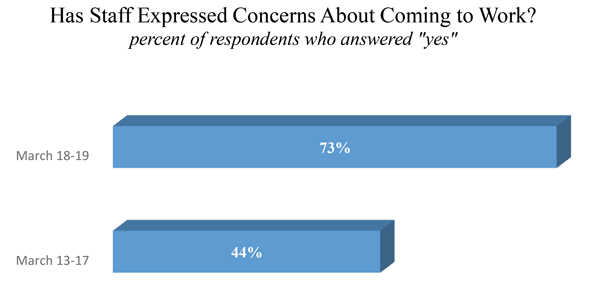 Staff concerns are also markedly higher in this second survey. Now 73 percent of respondents said that staff members have expressed concerns about coming in. Days earlier, that value was 44 percent.

The second survey also saw a significant increase in the number of respondents who expressed an interested in telehealth. In the first survey, only 5 percent of respondents said that they had already started to offer telehealth services. Seventeen percent said they had plans to do so in the near future. In the second survey, those numbers jumped to 9 percent and 28 percent, respectively. 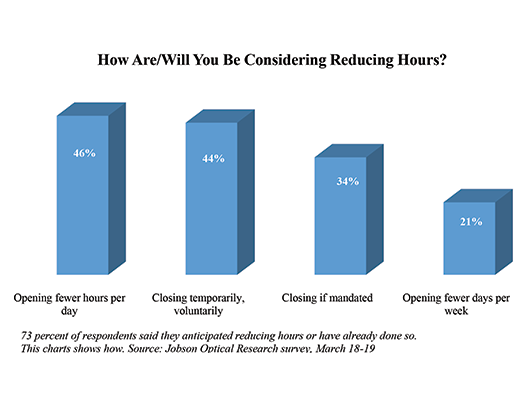 More than 1,300 respondents participate in the second Jobson Optical Research survey on the impact and reactions to COVID-19 among eye care professionals. The number of optometrists tripled in this survey, which was open March 18-19, compared to the earlier one, which was open from March 13-16. Fifty-nine percent of the responding ODs said they were female.