Respondents have ranging levels of comfort with pre-COVID routines and travel; they expect some changes will continue to last longer or forever

While eye care professionals (ECPs) saw a much stronger March 2021 compared to March 2020, on average the metrics are still lower than they were in March 2019, according to wave 21 of the Jobson Optical Research Coronavirus ECP survey. The highest year-over-year gains came in optical sales (24 percent), revenue (23 percent) and number of patients per day (22 percent). While the capture rate in March 2021 is similar to March 2019, the other benchmark measures are all down somewhat. 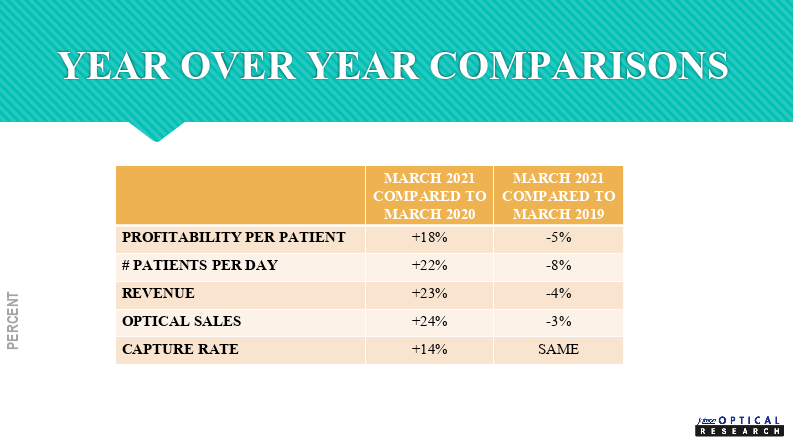 Sixty-seven percent of respondents said that their practice has the capacity to serve more patients than they are seeing now. On average, they estimated that they can see 29 percent more patients.

Similarly, 30 percent are unsure that they will be comfortable reducing PPE use in the office, and 46 percent said that they will consider that when herd immunity is reached.

Wave 21 saw the highest percentage yet of respondents who said that someone at their work location has gotten COVID-19; 53 percent said yes to this question.

Staff members are following suit and getting their vaccinations. 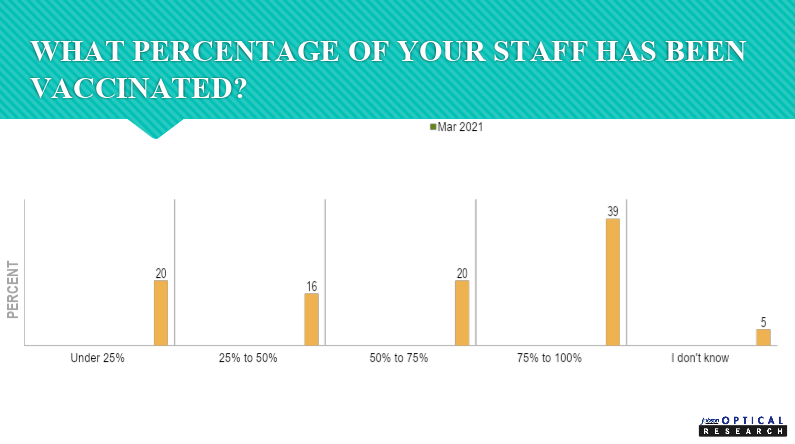 Eighty-eight percent said that the vaccine availability is either very important (68 percent) or somewhat important (20 percent) to full business recovery.

At least eight states are allowing eligible optometrists to offer COVID vaccines. In this survey, 37 percent of respondents said that they would like to see that happen, while 51 percent said that they would not. Another 12 percent noted that it is already happening in their state.

About a quarter of respondents said that they would personally want to deliver a COVID vaccine, either to patients or as needed.

By Julianne M. Koch, OD—“Can you please pull your mask up ma’am? The doctor will be in shortly.” I hear one of my staff members telling my next patient.
Read more
News

New Special Report on Telemedicine: Everything You Need to Know