Among those who are not open, 48 percent anticipate rescheduling appointments for June, while 37 percent anticipate being able to schedule appointments in May.
Generally, patients are willing to reschedule with 33 percent of respondents saying that patients are eager to reschedule, and 58 percent saying that patients are willing to reschedule if they are comfortable with the safety precautions in place.
The wave 9 survey, which was open May 8-12, asked whether patient demand was as expected. Forty-nine percent said it is as expected with 26 percent each saying it’s higher or lower than expected.

Wave 9 respondents who are open said that these are the primary protocol changes that they’ve made:

Telephone calls are the preferred way that respondents want to deal with sale reps over the next few months. The wave 9 survey showed continuing hesitation about traveling to industry events and meetings throughout much of this year. 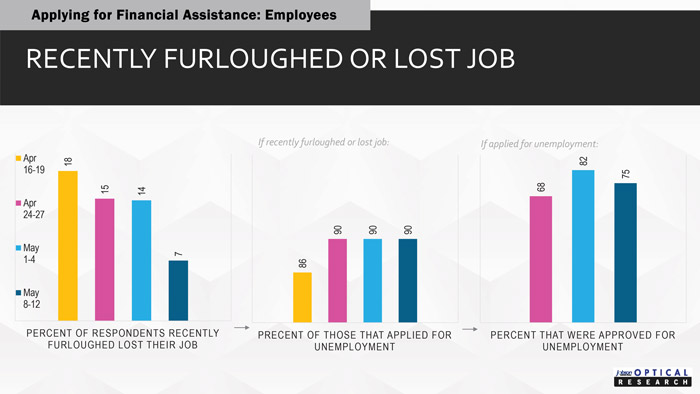 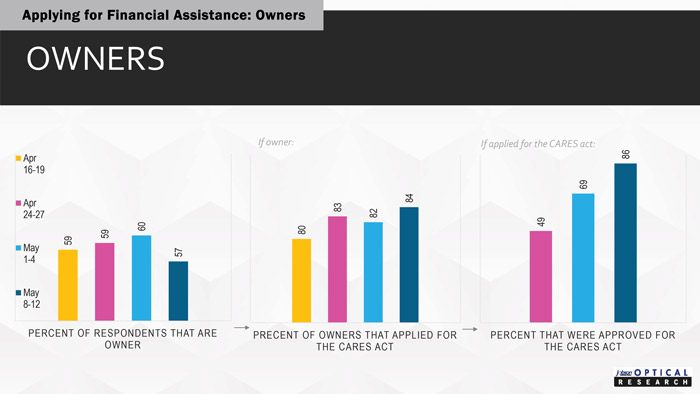 The AOA announced the recipients of its 2020 awards in April. We're recognizing all of their accomplishments, along with taking a closer look at some of their stories.
Read more
News

This article is so urgent that if you have PPP money sitting in your bank account, it’s something you must read now.
Read more
News

As the strictest stay-home orders are being lifted in some states, some eye care professionals are beginning to reopen, while others are planning for it.
Read more
- Advertisment -

On Being a Patient

By Marjolijn Bijlefeld, Editor, Women In Optometry When COVID-19 struck, I was about two months overdue on my annual comprehensive eye exam. I’m a flitterer...
Read more

The AOA announced the recipients of its 2020 awards in April. We're recognizing all of their accomplishments, along with taking a closer look at some of their stories.
Read more

AOA Educator of the Year: Mentor Guided Her Toward Career in Education

Newly awarded Optometric Educator of the Year Caroline Beesley Pate, OD, found her calling in academia, not long after she matched into a residency program at the University of Alabama at Birmingham School of Optometry to train under her mentor.
Read more

Roya Attar, OD, has had a somewhat unconventional path to her success.
Read more
Load more

Opportunities for Growth in 2020