Kathleen Foster Elliott, OD, Dipl. ABO, found her answer to what to do after she sold her practice. Passionate about advocacy, she became the government relations specialist for the Muscogee Nation. Dr. Elliott is a dual citizen of the Muscogee (Creek) Nation tribe–the fourth largest tribe in the U.S.). She upholds a family legacy in more than one way: she’s a second-generation OD, the granddaughter of banker who worked to make loans more accessible to Native Americans and the great-great granddaughter of Chile Morgan, a member of the tribe who came to Oklahoma on the Trail of Tears.

Dr. Elliott’s father, George Foster, OD, served as Dean of the Northeastern State University College of Optometry (NSUOCO). Not only did he work hard to improve the profession, he also worked to expand access to Native Americans. “My father was part of helping get laser scope for optometrists in Oklahoma,” she says. “He also expanded the program at NSUCO to address the three-year wait times for Cherokee applicants.”

Dr. Elliott was able to work with her father in private practice as well as for a stint with Muscogee and Cherokee Nation. She was named Optometrist of the year in 2014 and legislative Optometrist of the year in 2012. But the timing seemed right earlier in 2021 to make a big change. “I’m at a place in government relations where I want to make it better for the next generation of Native American citizens,” she says. “I feel humbled as a public servant.”

BACK TO HER ROOTS

As it turns out, working to advocate for the Muscogee Nation has been more meaningful than Dr. Elliott could have imagined. While her family for several generations was not raised in traditional Native American ways, she is being drawn closer to 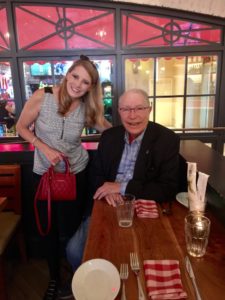 those roots. “In this role, I’m coming closer to the traditions. I’m learning more about the culture and roots.”

Her background in optometry has proven to be solid experience for this role. “Optometry is a legislated profession. It behooves everyone to be involved at the state, local and federal level,” she says. “I can use the skill set learned in optometry and apply it to advocacy in government relations.”

She advocates for the tribe on multiple levels. Subsequently, the advocacy work she does for optometry helps her in the conversations and efforts to showcase the initiatives that the Muscogee Nation is undertaking.

Even so, the advocacy work she had done for optometry helps her in the conversations and efforts to showcase the initiatives that the Muscogee Nation is undertaking. In her role, she connects on municipal, federal and state levels with the key directors and executive branch in the tribal government and promotes collaboration.

“We tell the story of the positive things that are happening,” she says. “A lot of the week is meeting with the chambers of commerce, mayors, state government officials, and others in our reservation boundaries of 11 counties. We work on mutual shared interests.” For example, when the COVID-19 pandemic start, “our Native American population was at a high risk,” she says. With the tribe’s vaccine efforts with the state and local health department, they were able to push the vaccination effort along more quickly, delivering more than 35,000 vaccines.

Her understanding of health care also aligns with some key initiatives. “It helps with me being a doctor… with the relationships I’ve built over time with legislative connections. I have the ability to interface and have the passion to help the citizens we represent.”

Dr. Elliott and her group have started several initiatives to help Native American students including opening more spots for them in academic institutions and a student mentoring program to encourage Native American youth to go into medicine. Additionally, the Muscogee Nation has recently purchased a hospital and will make that facility available to serve native and non-native citizens. Broadband initiative is designed to help close the digital divide in schools and also an access to health care through the use of telemedicine.

As the history of her family and the tribe has demonstrated, individual effort can be a powerful force. One of her brothers, an academic, Dr. Tol Foster, is directly involved in helping Native American pre-health students. Her other brother, Captain Calvin Foster, advocates with the Pentagon for Native American issues and helped named a U.S. Navy ship after the tribe. That’s why Dr. Elliott encourages optometrists to get into legislative advocacy on any and every level. “If you’re not at the table, you’re on the menu,” she says. “You have to be willing to serve and be involved in the grassroots.” Her hope is that new ODs will learn about advocacy and make waves. [“I hope I can] encourage the next generation to know that optometry can open many doors,” she says.

Dr. Elliott leads with her favorite quote from her father and grandfather, a Muscogee Creek proverb.

We eat the fruit of the trees we did not plant

We warm our hands by the fires we did not build

We drink from the wells that we did not dig

And we stand up on the shoulders of giants have gone before us.

Truly, the profession of optometry has large shoulders, she says, “and we stand upon those who have gone before us to build optometry as one of the most fulfilling and best professions.”