Doctor Became a Trailblazer by Doing What She Loved

As Dr. Betty Harville nears her retirement, she reflects on the career that took some unexpected turns 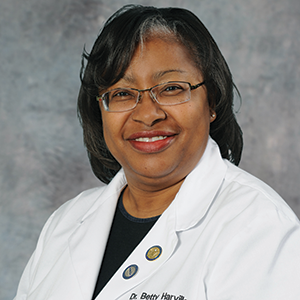 At the end of August, Betty Harville, OD, will retire from the Southern College of Optometry (SCO), closing the chapter of her career in academia. Dr. Harville has left memorable impressions on so many students and colleagues over the course of her 36 years serving on the faculty. She is not only the school’s second-longest serving faculty member, but also the longest-serving woman on the faculty and the first African American woman to achieve the full rank of professor at any of the nation’s optometry schools in 2001. “It’s a great honor and very humbling.”

Her retirement comes at a tumultuous time in the nation’s history, and she reflects on the slow and difficult acceptance of optometrists and leaders of color. “I’m hopeful that people are opening their eyes and seeing that changes need to occur. It needs to start in people’s heart.” She has led by example throughout her career, adapting with the changes.

Dr. Harville delivered her last lecture in April via Zoom; her final year at SCO has been anything but ordinary. As she went through virtual instruction for the first time, she adds that she was learning a lot, as well, as her lessons evolved to allow her to continue interactions with students.

Dr. Harville says she was a high myope as a child but she never let her grades show it. “I made all kinds of modifications in school from listening well and sitting in the front of the class,” she recalls, laughing. Then one day when she couldn’t get a seat up close, the librarian in her elementary school asked her to read the captions from a film. She was referred to an optometrist, and her world was changed by the details, like her mom’s face and the leaves on the trees, that suddenly came crisply into view. “It was a shock because I didn’t know what I was missing,” she says.

When it came time for optometry school, she planned to stay close to home and attend SCO. Since the school was not providing financial aid at the time, she anticipated enlisting in the military to pay for school. She said that by chance, she also sent in an application to Indiana University College of Optometry. “I was going to sign the paperwork for the Army on Saturday, and on Friday, I received a letter that I was accepted to IU with an academic scholarship. I called my recruiter and said I wouldn’t be coming down.”

DETERMINED DESPITE PATH OF HURDLES

Dr. Harville planned to return to her hometown and join the optometrist there in his practice after her graduation in 1983, but at that time in Tennessee, she says that there wasn’t a warm welcome for the state’s first African American female optometrist. “I love him to death, but he was Caucasian, and it didn’t work out,” she recalls. She went through a series of difficult conversations and interviews; “One doctor didn’t realize I was African American; I had picked up an Indiana accent at school,” she says. “At the interview we set up, he peeped through the blinds,” and then told his receptionist that he couldn’t see her.

She was discouraged, of course, but that didn’t stop her. Eventually, “God provided,” she says. She received a phone call from Harlington Hanna, OD, SCO’s first African American faculty member. “He asked me if I had thought about a residency.” She hadn’t, but she applied and was accepted. Then the president of the college suddenly passed away, putting her residency on hold. However, she was able to cover for another doctor who was moving out of state in 1984. “That is how I started as a part-time, temporary OD in every department,” from school screenings and nursing home visits to primary care, vision therapy, pediatrics and geriatrics.

Her passion developed for geriatrics and low vision, and she began leading the department with Robert Ebbers, OD, running the clinic as well as labs and didactic classes, and she also became a mentor for the National Optometric Student Association (NOSA). She enjoyed the opportunity to watch her students in the classroom and from NOSA evolve into doctors and her colleagues. “I’ve had several sons and daughters of my previous students come back, too,” she says.

While a career in academia wasn’t her original plan, it found her and was a perfect match. “When I came home, I was home,” which was just what she wanted as she and her husband raised their two daughters. “It gave me the opportunity to have a career, teach, practice and have it all.”

Dr. Harville may be best known for her Clinical Communications and Patient Care course, which covers history, chair skills, letter writing, assessment plans and wrap-ups. It’s an early exposure to the clinical setting for second-year students and an opportunity to talk through chairside conversations. With the video camera running, Dr. Harville acted out scenarios as different patients—representing those of all ages and with various patient histories—and her students practiced improving their communication skills through the exam simulation.

Together, the four-to-six students in a group would critique the conversations, and they kept a recording of their interactions. “The students learn how to handle these cases and what questions to ask that will be helpful,” she says. “They can watch it to see what they are doing well and what they need to work on. It helps them get over the fear of talking to people, making them more confident, sympathetic and empathetic as they handle their patients. You have to take care of your patients—that’s your bread and butter.”

LEAVING BEHIND A LEGACY

Dr. Harville plans to stay in the Memphis area following her official retirement date on Aug. 31. She looks forward to spending time with her family and focusing on staying healthy; Dr. Harville is a proud survivor after two breast cancer diagnoses in 2012 and 2015.

“It really doesn’t seem like it’s been 36 years—each year brings a new class that is totally different with its own personality,” she says. “It’s been a journey—a good and productive one—and I hope that I’ve made an impact on the students to be better people and optometrists and more compassionate with their patients.”

Several of Dr. Harville’s former students and colleagues shared memories and best wishes for her retirement. Read them here.

When Damaris Raymondi, OD, of Metropolitan Hospital, part of NYC Health and Hospitals, looked around, one thing was clear: there was a prominent lack...
Read more
New

2020 WO Theia Award Nominations Are Open

Nominations have opened for the 2020 Women In Optometry Theia Awards of Excellence.
Read more
- Advertisment -