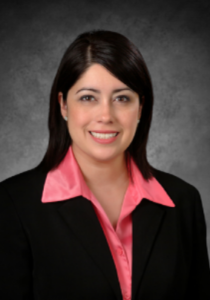 Sandra Juarez Fortenberry, OD, FAAO, ABO Diplomate, is the new dean of Rosenberg School of Optometry and the first Hispanic female dean of an optometry school in the Association of Schools and Colleges of Optometry network. She understands the many challenges that optometry students have today – and she has a special affinity for those who are the first-generation college undergraduates and optometry school students, as she was. Her parents worked hard to provide her with opportunities, but she also had to create those for herself. For example, in her final year of undergrad, she did not get accepted to an optometry school program. Rather than change her goals, she moved to Houston and enrolled in a six-week pre-optometry program for economically disadvantaged or underrepresented minorities and provided support for first-generation college students, where she learned new test-taking skills and learned how to incorporate her 35-hour a week job during undergrad years into her application.

After completing a community-based family practice residency and working in a medical facility, she joined the University of the Incarnate Word Rosenberg School of Optometry (UIWRSO) in early 2010, as it was just being established. She was part of the team working on the school’s initial accreditation as well as its 2022 reaccreditation. She was honored as the American Optometric Association Young Optometrist of the Year in 2013 and has served on the Texas Optometric Association board and as its president in 2019-2020.

The advocacy, clinical, education and legislative skills she has cultivated over the past decade serve her well at this moment when new optometrists must be able to adapt to changing environments. ODs in Texas and many other states have recently been successful in expanding their scope of practice, meaning that students have to leave optometry school with even more skills and knowledge. On top of that, as dean, she wants to create higher levels of engagement with faculty, the community and even industry because eye care today is so dynamic.

Students can only be prepared for the environment of today, and that’s where networks of organizations and industry can be so important. As a school, our role is to deliver strong fundamentals and teach students how to use the tools that they already have in order to become effective life-long learners. “We all need each other,” Dr. Fortenberry says. That’s true in a practice setting where “you need a receptionist and support staff as much as you need a doctor. And it’s true of the post-graduate setting, where we need industry to share its research and development and advocacy groups to help us gain access to it, and those organizations need us. It takes a village.”

Dr. Fortenberry strives to have “an understanding heart” to students’ struggles, but she also seeks to remind them that this current pace isn’t what they’ll face forever. “Balance is a great thing, but now is the time for sacrifice.  That tilt toward 50/50 balance will come, but maybe for now, it’s 20/80.” She particularly wants to encourage students that the sacrifices they make now will mean that they can be part of this profession that provides such critical eye health services.

The other major lesson that she hopes students leave with it that it’s OK to relax but not get lax. “Our students are overstimulated,” Dr. Fortenberry says. Today’s optometry students are exposed to even more pressure to succeed, not just as ODs but as practice owners and managers, salespeople and even social media influencers. “There is information coming from everywhere. We need to provide more support to our students.”

She encourages them to reach out. “It’s important you know where to go for information as a student,” she says. “Know your limitations and when to ask for help. You can talk to an OD, another student, faculty and staff or even support structures, like advisors and therapists, depending on what you need.

ABOVE ALL, FOCUS ON THE PERSON

Just as she knows that students are not just the sum parts of their academic records, Dr. Fortenberry wants students to focus on the whole patient – not just the eyes. “There’s a whole body we are treating,” she says. “We need to remember to treat all bodies—ours included.” So look for help where it’s offered. She credits Allergan for understanding that the more support for all optometrists, students included, the better off the profession will be. She says that Marcy DeWalt, executive director of professional relations for Allergan, has been a strong source of support for the profession and especially for female students and ODs. DeWalt has been involved in various events and women’s panels, and Allergan has been a supporter of the Women in Optometry Leadership Conference since its beginning. This continuous and ever-expanding network of support has only made Dr. Fortenberry more excited for the future generation of ODs.

“Becoming a doctor of optometry includes knowing how to become a lifelong learner,” she says. “It’s a four-year degree, but think of all the things we’ve learned in the industry in the last 50 years. There is no way we can possibly teach you everything in four years. We all need to keep learning.”