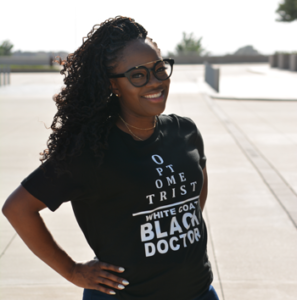 “You are always one introduction away from reaching a goal or achieving your dreams,” says Essence Johnson, OD, FAAO. Dr. Johnson’s work as Chief Visionary Officer in Black EyeCare Perspective has made waves in the optometry community, and now she spends much of her effort on the group’s newest addition; the Black EyeCare Perspective Pre-Optometry Club. Black EyeCare Perspective’s mission statement reads, “Black EyeCare Perspective was designed and created to cultivate and foster lifelong relationships between African Americans and the eyecare industry.” Adam Ramsey, OD, and Darryl Glover, OD, are the founding members of the group, and when Dr. Johnson’s path crossed theirs—everyone won. “I have been fortunate to go to optometry school with Dr. Glover, and I met Dr. Ramsey through social media,” she says. She originally met Dr. Ramsey indirectly after he reached out to her about using her Black history in an optometry timeline. “He wanted to share it at a youth event he was hosting,” she says.

A while later, she reached out to him after seeing a particularly poignant post and he called her right away. What started as a spontaneous phone call turned into a two-hour conversation about the lack of taught networking and what Dr. Johnson hopes to contribute to the profession. “We were having a conversation about affecting change in the area of representation of Black and African Americans and minorities in our field and what we can do about that,” she says. “He has a lot of ideas and so do I… a dangerous combination,” she says, laughing.

When the doctors found they shared a similar vision, they said, “This is perfect. Let’s do it!” Dr. Johnson was inspired. “My flame was lit. I felt renewed.” She finds her title of Chief Visionary Officer fitting. “It’s really being able to bring ideas to life with other people, and implement them and put them to action.” Dr. Johnson is very proud of the growth and visibility of Black EyeCare Perspective and accredits much of its gains to the success of their IMPACT HBCU (Historically Black Colleges and Universities) event. Even the COVID-19 pandemic couldn’t stop Dr. Johnson and her colleagues. For the October event, they rearranged the format to something more COVID-friendly, which turned out to make a big impact. “We could reach more people this way than the original plan,” she says. “The idea was always about reaching out to HBCUs and focusing on them to recruit Black students.” Students are then invited to join their pre-optometry club, where members are assisted in their journey to optometry school with the founders serving as agents and mentors in the process.

EDUCATION AS A LIFELONG JOURNEY

Dr. Johnson describes herself as HBCU-made, having received her undergraduate degree from Prairie View A&M University. As she co-advises the Black EyeCare Perspective Pre-Optometry Club, the education is not limited to the students alone. Even Dr. Johnson finds her own horizons broadening. “I am learning so much about the dimensions of diversity and inclusion,” she says. She calls what she does, “taking mentorship to a heightened level.” She notes the disparity in optometry school acceptance numbers for Black and African American students. The assistance from the Black EyeCare Perspective Pre-Optometry Club ensures “not a single, potential, future Black student or optometrist is ignored, discouraged or disadvantaged.” Dr. Johnson hopes that she is able to pass along to her mentees “pieces that I feel I did not get in optometry school and make opportunities for them I did not have.” She hopes to create well-rounded applicants and quality young adults and optometrists for the future of the profession.

In her life outside of her work with Black Eyecare Perspective, Dr. Johnson is a community and correctional health optometrist in Dallas, Texas. She has been at the out-patient clinic since 2014. “I’ve seen thousands of patients—many in their 50s and 60s—for their first eye exam in their life,” she says. One of the biggest challenges is that the clinic does not have an optical, so Dr. Johnson recently received a grant to help dispense eyewear to their patients at no cost.

She is a Diplomate in the American Board of Optometry and completed the Diversity and Inclusion certificate program with Cornell University. She is also a member of Sigma Gamma Rho Sorority, Inc. and works with her chapter’s youth group and non-profit organization. She loves personal and psychological work, such as attending empowerment meetings and creating vision boards. “It’s learning who you are as a person and living your life from the inside out,” she says.

Black Eyecare Perspective will host a signing day in the spring to recognize students accepted into the next entering class and celebrate the achievements and hard work of the future doctors. The organization also has a plan going forward to be more active during the fall recruitment season. The club meets monthly, and the virtual meeting platforms have made it possible to encompass a diverse group of prospective students. To quote Dr. Johnson’s bio, “She is redefining the color of the eye care industry one percent at a time through advocacy, action and accountability.”