OD Finds Her Happy Medium of In-Person and Virtual Events 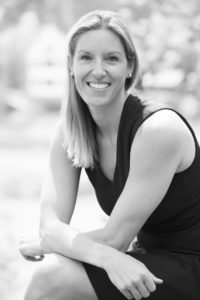 A self-described people person and extrovert, Jennifer Stewart, OD, of Norwalk, Connecticut, has a passion for consulting and speaking at network events. Her husband tells her she gains energy by being around people, and she has always loved going to live events, dinners, conferences or basically anywhere else she could connect with others in the industry. She runs Performance 20/20, a sports vision training program for athletes, as well as hosts roundtables and presents to small, medium and large groups at professional conferences. Professional work often kept her busy traveling and presenting.

Dr. Stewart’s face-to-face approach had to change in March 2020 as the world abruptly changed. Suddenly her sports vision practice was working only remotely with its athletes, and she was asked to conduct a virtual presentation for the first time.

“I never thought I’d be a good virtual presenter,” Dr. Stewart says. “It was super awkward at first.” She says there was a learning curve of where to look when virtually presenting and it was hard to gauge the interest and body language of the audience through the screen. “But when the world shuts down, you have no other option,” she says.

Dr. Stewart spent a lot of time learning the ins and outs of virtual meeting platforms and had to adjust the way she did things to ensure that connections were still being made. She also says it was strange to see how disconnected and nervous people felt on these new virtual meetings compared to just a few months prior, where smiling faces, laughs and handshakes were commonplace at busy meetings. 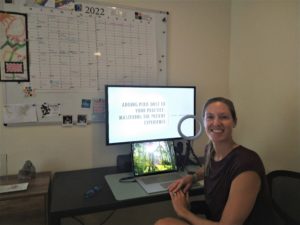 Once Dr. Stewart got used to the way virtual presentations were done, she thought she’d never go back to in-person meetings again. She was conducting virtual presentations up to five times a week and quickly got the hang of things. Virtual presentations allowed her to say “yes” to events without having to worry about traveling for multiple days. She says she also has had the chance to do more CE virtually in the last two years than in her 15 years of practice.

Virtual presentations have given Dr. Stewart the chance to attend conferences not so close to home. In May, she presented to optometrists in Central and South America, and she has presented virtually in India and Vietnam. “It’s an unbelievable experience to be part of an optometry conference in another hemisphere,” Dr. Stewart says. With two boys at home, she has also found that virtual presentation tools have given her more flexibility in her life.  “I can have dinner, put the kids to bed, and log onto a conference for an hour,” she says. “I can give my full attention to what I’m doing, and I’m not missing out on information or the kids’ baseball games.”

While Dr. Stewart appreciates how virtual the world became for a while, she realizes that there are also positives to going back to in-person conferences. “There is so much to be learned outside of what happens in a virtual lecture,” Dr. Stewart says. “I gained so much knowledge and experience in hallway conversations and lunches.” She says the energy of presenting to an actual group of people cannot be matched, especially when she can see the smiles, inquisitive looks and laughs. People often come up to her after presentations and ask questions. In contrast, in virtual presentations, they may fail to follow up or connect later. Still, they often find her through LinkedIn or social media later on.

Now that she has experienced both, she can’t imagine having to choose between one or the other.

Beverly Bianes, OD, was named a Pyxis Honoree by the Optical Women’s Association (OWA). The award, named after “The Compass” constellation, is given to...
Read more
News

Optometry Gifts For All

Include The Family In Philanthropic Efforts