In March of 2019, Women In Optometry spoke with Rachel Simpson, OD, on the research she and her team of fellow student researchers were doing on the wage gap issue faced by American women. Since then, Dr. Simpson and Breanna Scott, OD, have taken the same data and re-examined it leading up to the publication of their research in November of 2020. Drs. Scott and Simpson gained their data from an internet-based survey where they collected responses through a questionnaire from 831 ODs in every U.S. state.

“This is from the same data set, but a new analysis,” says Dr. Simpson. In their fresh look, the doctors included only respondents who reported working full-time as optometrists. They excluded respondents who completed a residency or own their practice. They analyzed the current salary of all included respondents, and the starting salary of those respondents who had recently graduated. Those salaries were then broken down by region and practice type. They were surprised to find that wage disparity begins at entry level jobs.

“I found it most surprising that in an optometrist’s first job—no matter what practice type, what region—men made more than women,” says Dr. Simpson. “We knew there was going to be a gap, but it was kind of disheartening,” says Dr. Scott. “This gives us the motivational tools to try and eliminate it.”

Dr. Simpson and Dr. Scott were prepared to be met with some skepticism. “We wanted to go deeper into the numbers because it’s a complicated issue,” says Dr. Simpson. “Talking about the wage gap can make people defensive. They might say, ‘Well, obviously women make less money because x,’ but it’s not that simple. One factor doesn’t explain the entire wage gap. In this research, we controlled for more factors to isolate a wage gap that we couldn’t explain.” 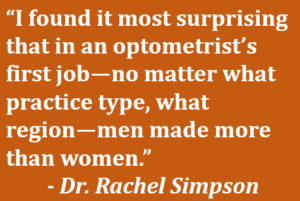 According to the doctor’s study published in Optometry and Vision Science, the journal of the American Academy of Optometry, the gender wage gap issue can be divided into explainable and unexplainable portions. To quote the study, “The explainable portion consists of differentiating factors that contribute to the wage gap, including differences in pay by location, professional segregation, hours worked, work interruptions, productivity, education, skill level, and experience,” say the authors. In their words, even when the explainable factors are controlled for (control: a factor that is kept the same in every test) an unexplained gap in pay remains. The doctors maintain that this unexplained wage gap comes down, at least in part, to gender discrimination. To read the study in full, click here. 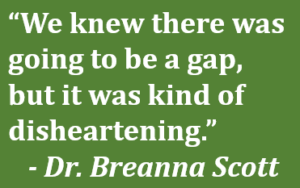 As it would seem, stereotypes are a major factor in many of the assumptions that lead to women practitioners being offered less money. According to the journal article, “Another hypothesis for the widening gap from starting to current salaries is the persistence of stereotypes regarding a work-life balance tradeoff. There is the impression that women prefer flexible schedules and that granting flexibility must come at the reduction of base salary. However, research shows that both men and women like flexible schedules, but men are not accepting less money in exchange for flexibility.” There is also an assumption that women want to be mothers and are penalized for their choice, being seen as less dedicated to their career or even less competent.

In all this, the doctors aim to close the wage gap. In addition to wanting employers to reconsider their biases and payment practices, they encourage women ODs to consider the male salary data presented in the study when negotiating for their salaries. “If we want to close the wage gap, women need to be paid what men are paid. Our article tells you what the men are paid by region and practice type. That’s a useful starting point for salary negotiations,” says Dr. Simpson. They also offer a small note of encouragement on perceptions. “Gender roles are changing,” says Dr. Scott. “It’s interesting for our generation of ODs what this is going to look like in 20 years.”

Women In The News – February