One Moment of Inspiration Inspires the Next Goal 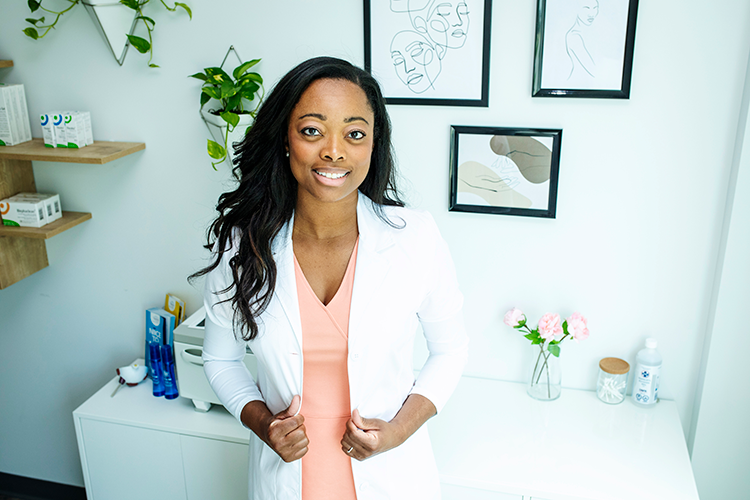 Renee Phipps, OD, has found an abundance of motivations. From the motivation to get away from the cold and take a post-optometry school job in Florida, to the desire to make a difference and the natural propensity for inspiring others, Dr. Phipps is an energetic ambassador of optometry. The Canadian-born OD and her husband, Nana Owusu, OD, graduated from the Illinois College of Optometry in 2008 and received job offers in Florida. During their tenure in Florida, they were able to see a wide, diverse patient base and able to practice full-scope, often seeing clinical cases that were uncommon.

Eventually, Dr. Phipps and Dr. Owusu knew they wanted to open their own practice, but they wanted to give their Florida employer plenty of time to prepare to lose them both. What they did was —in a sense—commute…to Winnipeg. The doctor duo hired one staff member to answer phones, and the two of them would alternate flying up to Winnipeg from Friday through Sunday. This lasted from their opening in April of 2010 to July of 2010.

Fast forward to present day, Drs. Phipps and Owusu expanded beyond their three locations in different communities within Winnipeg with the opening of their fourth location of Prairie Eye Care in Edmonton, Alberta. This new clinic, in her husband’s hometown, “provides us the opportunity to continue to serve the community in a way that enriches the residents and gives back in honor of the support given to us as youth,” Dr. Phipps says. In the past three years, all of the practice locations have been updated and remodeled. When it came to designing the new spaces, Dr. Phipps was very involved. “All our clinics are designed to feel like you just entered your friend’s living room—a comfortable space with good lighting that doesn’t look commercial. It’s cozy, with nothing opulent.”

Dr. Phipps calls the growth of the practices “organic” and attributes the success to the style and philosophy of practice to which the eight doctors on the team ascribe. “We try to focus on family and community,” says Dr. Phipps. “We always wanted our patients to feel like we’re part of their community,” she says, noting that those connections have had patients thinking of them as family, too. “We’ve been invited to many dance recitals and soccer games.” Having these relationships with their patients has certainly paid off, having one patient refer more than 60 people.

“For us, our exams start with us saying ‘Hi, how is your day?’ We’re not launching straight into the exam questions,” she says. “How is the patient doing? How is the family doing? It’s how our exam starts, and it’s incredible what you can uncover that’s relevant to the exam.”

With an emphasis on comfort for the patients and patients’ families, the doctors make sure to explain things in common terms. “It doesn’t make the exam any longer to ask someone how they’re doing or explain what’s going on, what’s happening in the exam and how their eyes affect their overall health.”

Another community building strategy the doctors implemented was to build relationships with local MDs; from pediatricians—a passion of Dr. Phipps as a mom of three—to doctors treating specific diseases. Dr. Phipps is an active member of the Manitoba Association of Optometry, serving on one of the professional committees.

Part of serving the community includes serving the members who don’t necessarily come into the practice. “We found that a lot of kids [in our community] didn’t have plans beyond high school… so we have a scholarship set up. If you don’t show people the possibilities, they don’t know how far they can go,” says. Dr. Phipps. “Two years ago, one of our recipients got into medical school. You can have a dream and if someone gives you an opportunity, you can achieve it.”

Dr. Phipps spends her time away from the office speaking at schools, as well. She recently spoke at an all-girls school about the practice and the recent launch of their dry eye clinic, Natural Eyes. “It was important to me to say this career is what you make of it. Those opportunities are out there.”

Students from the doctors’ alma mater, where they both serve as adjunct professors, also come to do externships with Prairie Eye Care. 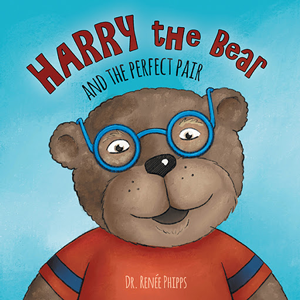 Writing has always been a passion for Dr. Phipps. As a student, she was the recipient of awards on some dry eye papers, and she has since written articles for the American Optometric Association. The writing doesn’t stop at non-fiction, though. In the coming weeks, Dr. Phipps will release her first children’s book, Harry the Bear and the Perfect Pair about a bear with blurry vision and his first adventure to the optometrist. The book will be available in the U.S. on Amazon and Barnes & Noble and in Canada in Amazon, FriesenPress, Indigo and Chapters. [EDITOR’S NOTE: Dr. Phipps’ book has released since this story was originally published. Find it here.]

From Associate to Owner