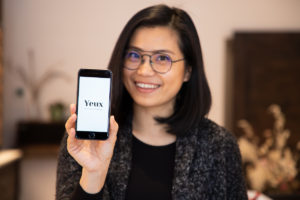 “I always emphasize and explain the importance of the 20-20-20 rule to my patients, especially after the pandemic. I talk to anyone, who spends most of their days on digital screens – everyone, essentially,” says Lili Liang, OD, of Vancouver, Canada. Most of the responses are optimistic, she says, but it’s rare for patients to keep the promise once they leave the exam room.

“I looked online to see if there was a resource I can guide my patients to, but there was nothing specifically designed in the market. The apps were either too complicated or not customizable to one’s work schedule,” she says. When she shared this concern to her high school friend, who works in tech, he encouraged her to develop her own app rather than hoping for something good to come out in the market. “I reached out to my other friend, who works as an industry tech provider, and he introduced me to an app developer,” Dr. Liang says.

The sole focus of the app is to send reminders with a message to daydream – take a break from the screen. “When I was little, my mom would always tell me that looking at the color green, or anything in fact, would be good and protective for my eyes. I was encouraged to be ‘surrounded’ by green visuals,” she says laughing. “Although it was only a myth, I still made the app’s central color a deep green, something that makes users feel as if they’re at a spa.” 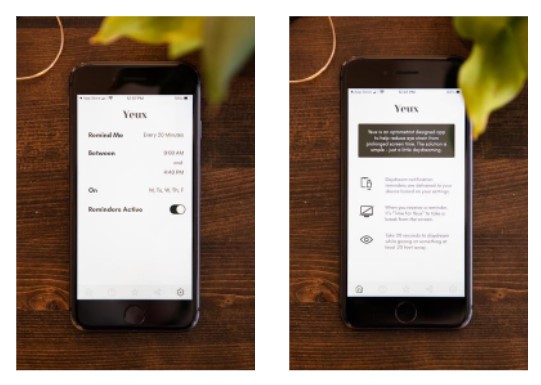 Once someone downloads the app, they’re asked to answer three simple questions to personalize reminders, such as inserting a work schedule and entering a desired reminder time interval, which ranges from 20 minutes to an hour. People can choose specific days of the week if they have an irregular work schedule or a special event. Users can also manually start a session whenever they are exposed to more screen time outside of their regular work schedule.

“Everyone gets a reminder, such as ‘getting a gold star from your eye doctor’ or ‘reminding you to daydream.’ I love this feature as it gives an opportunity to reset and also a chance to bring a little smile,” Dr. Liang says. The app automatically pairs with a smartwatch.

“Patients are amazed whenever I bring up the app during consultations, and a lot of people say that it’s exactly what they’re looking for,” she says. Dr. Liang places a QR code in her exam room where patients can scan it with their camera and automatically get directed to the download. “I built it out of the necessity to reduce eye strain in my patients’ lifestyle, so I’m overjoyed to hear and see positive reactions,” she says.

Dr. Liang has also been getting a lot of support from fellow eye care practitioners who have been promoting it on their social media platforms. “It’s a topic that has been long overdue, so seeing my colleagues spread the message has given it a great boost of energy,” she says. “I encourage fellow ODs to share the app and the 20-20-20 rule with their patients.”

The app can be downloaded on the App and Play Store and Dr. Liang can be reached here.

“The whole journey has been exciting, and the results worked out better than I expected,” she says.

Faten Edris, OD, says that as a Persian immigrant, she’s always had to manage her family’s household while attending school. As one of the...
Read more
Outside Interests

Jobson Releases “A Comprehensive Guide to the Modern Management of Keratoconus”

Jobson Medical Information has released Keratoconus 2023: A Comprehensive Guide to the Modern Management of Keratoconus, one of two key components of the 2023...
Read more

When an opportunity is meant to be, it often finds a way to work itself out. That was certainly the case for Ashley Atencio,...
Read more
Load more

Utilizing a Mother-Daughter Relationship to Conquer a Cold-Start Practice