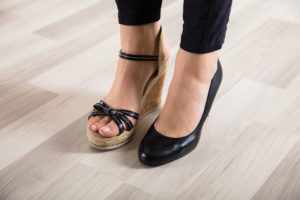 In a recent Women In Optometry Pop-up Poll on appropriate office footwear, more than one-third of respondents said that open-toed shoes have no place in an optometric office. Others made the distinction between the role of the individual or the type of footwear.

For example, 26 percent of respondents said that peek-a-boo toe shoes are OK, and a little more than 20 percent said that sandals or open-toed shoes, as long as they’re not too casual or flip-flops are OK. Another 17 percent said that open-shoed casual shoes or even flip-flops could be allowed.

Other respondents focused on tasks that the employee does. For example, some said that billing staff or those who have no contact in patient care areas can wear sandals. Others said that only doctors should be allowed to wear open-toed shoes. Others noted that COVID-19 changed the dress code. “We wear scrubs and tennis shoes,” said one.

Whether toes belong in the exam room is, apparently, a contentious question. Forty-six percent of the respondents said flat out it is not OK for the doctor to wear open-toed shoes, while 39 percent said it was OK. Nearly 14 percent said that it was maybe acceptable, and the remaining one percent did not know.

“We encourage individual dress sense. Many clients comment on our footwear.”

“My daughter’s female pediatrician and my own PCP wear sandals to work . As long as feet are well-groomed and the overall outfit is professional, it’s fine– especially post pandemic where professional clothing means something new.”

“Since COVID, our entire office wears scrubs and tennis shoes. We are not going back to uncomfortable shoes. Everyone looks professional and I no longer have to send staff home for inappropriate clothing.”

“Dress sandals for the office are OK, but save the flip flops for the beach.”

“I think open toes would be OK if toes are done.”

“Staff wears scrubs with appropriate closed-toe footwear. Doctor is typically dressed in professional clothes with the option to wear open-toed shoes with a heel as long as pedicure is current and the shoes are dress shoes (no flip flops, casual sandals).”

“If we want to be taken seriously as medical professionals, we should keep our footwear conservative and on par with other HCPs. Also, not everyone has the same sense of foot hygiene — and no one wants to be looking at anyone’s fungal nails, cracked heels or snaggle toes!”

“Our policy allows for open-toed shoes, but I would prefer they were not allowed as we are a very medical/clinical focused practice.”

Pop-up Poll: Fun in the Sun

How do you spend your time playing or sweating in the sun?
Read more
- Advertisment -

Confidence Increasing as a Result of Vaccine for Some but Not...