Nutrition is an important part of a healthy lifestyle. In a recent Women In Optometry Pop-up Poll, a majority of the respondents shared that they generally eat well if work and family responsibilities do not interfere with their daily rhythm.

More than half of the respondents reported that they believe they eat well most of the time in contrast to the 15 percent of respondents who said they do not eat well as often as they would like. 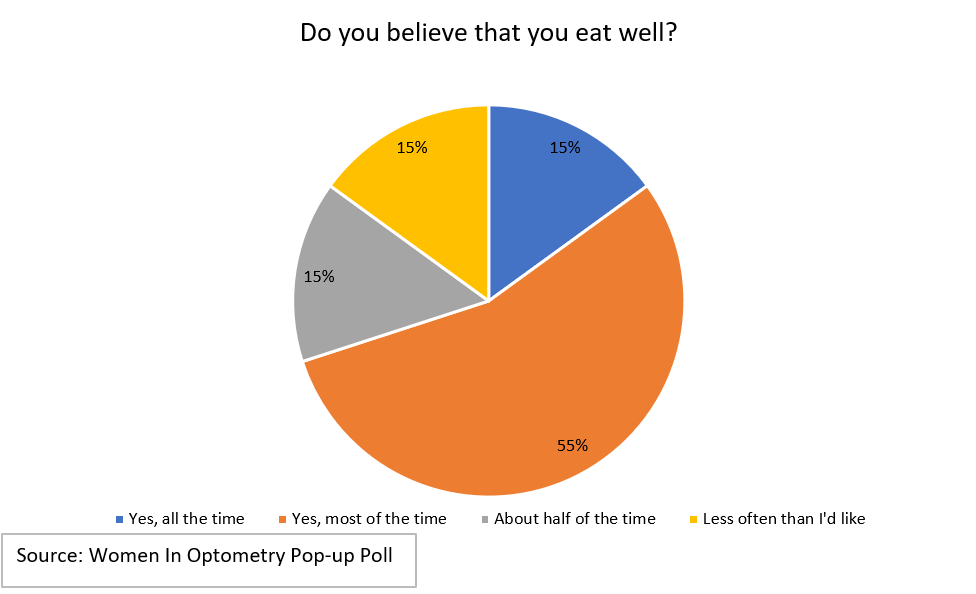 WO asked similar questions in a poll more than two years ago — before COVID-19 — and overall, the percentage of respondents now saying that they eat well most or all the time is higher now (70 percent compared to 64 percent then).

In the 2021 poll, 72 percent of respondents said that they usually prepare their meals at home with fresh ingredients. In the 2019 poll, however, that percentage was higher at 80 percent.

Overall, 94 percent said that they like to eat home-cooked, prepared or takeout food at home, reflecting the significance of allotting specific time frames out of the day dedicated to meals rather than cramming them within responsibilities.

When poll respondents were asked about their meal planning routines, a lot of them mentioned prepping meals during the weekends when they have more time on their hands.

One respondent said, “to help with indecision, fatigue and last-minute scrambling to come up with something healthy to cook, we typically prepare our meals in advance and meal prep for lunches and dinners before the work week begins.”

Another respondent shared that they “started getting meal prep kits a year ago, which has helped with meal inspiration and getting other family members to cook, because the directions are provided and all the ingredients are prepared.”

Two respondents emphasized the importance of home-cooked meals, which are often substituted by takeout and fast food.

One respondent said, “I feel it is so important to eat fresh, real food. It’s hard with work-life balance because you have to premake healthy snacks and plan meals. However, it’s easier when a spouse can jump in and help.”

Similarly, another respondent said they limit the times they eat out. “We rarely eat out. When we do, it’s usually for a special occasion, such as a birthday or a celebration. I always bring my lunch to work, sometimes leftovers composed of raw vegetables, protein and fruit. Cooking and eating meals from home has better health benefits of less salt, fat and carbohydrates.”

WHEN LIFE GETS IN THE WAY

The 2019 to 2021 comparison here shows some interesting shifts: respondents now said that they are busier with work and family demands (which came in at 65 percent and 30 percent, respectively, in the 2019 poll). Respondents in 2021 also seem to be more inspired; in 2019, 38 percent said that inspiration was a barrier; this year, that’s down to 30 percent.

Those respondents who are household chefs would like a little help, please. Not getting help was an obstacle to healthy eating, and approximately 17 percent of respondents said they receive little to no help from their family members.

The data is reflected when more than a quarter of respondents reported that they are almost exclusively the chef in their household, in contrast to the 19 percent of respondents who rarely cook.

Although the recognition for healthy eating is high, a number of ODs are still a bit hesitant to include a conversation on nutrition in the eye exam process. Approximately 60 percent of respondents said they sometimes work nutritional wellness into the patient conversation, and about half of them say they counsel their patients on nutrition frequently.

One respondent said she asks patients about their diet because she believes that a “good diet is directly related to good eye health.”

The majority of respondents were female ODs.

Love is in the air in February, so in this WO Pop-Up Poll, we look at whether your love of optometry carries you through...
Read more
Polls

According to a recent Women In Optometry Pop-up Poll, many eye care professionals set and met their personal and professional goals. Almost half (47...
Read more
Polls

Pop-up Poll: Have You Ditched Your Scrubs?