Home Polls Majority of Respondents Said that COVID-19 Did Not Bring Lasting Interruptions to...
Polls

In a recent Women In Optometry Pop-up Poll, the majority of the respondents said their workweek schedule has not undergone significant change during the pandemic.

HOW HAVE WORK HOURS CHANGED AFTER COVID-19? 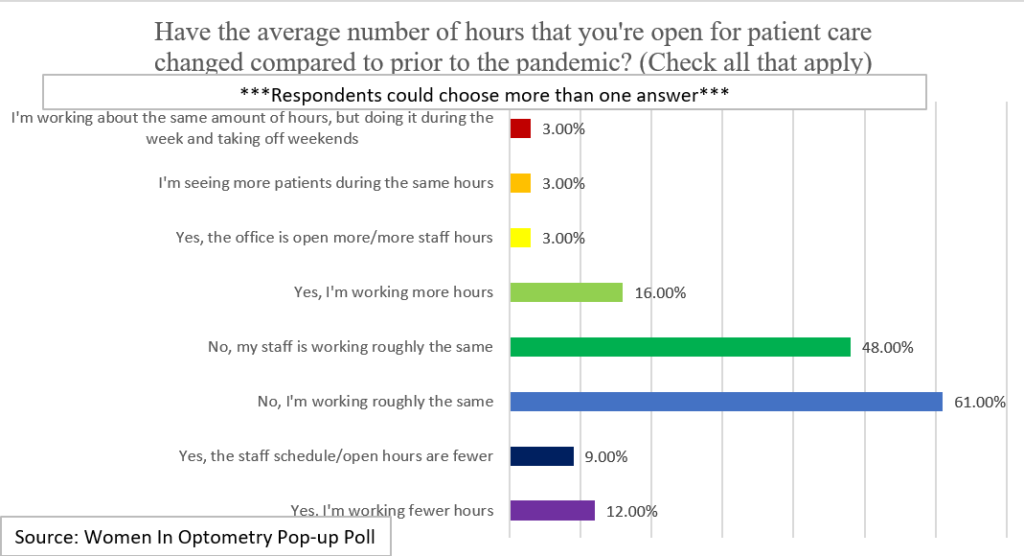 More than a third of the respondents who decreased their work schedule said it was because they wanted to work fewer hours. More than a quarter of respondents said that lower patient volume and patient flexibility was a factor of work hour reduction. Respondents could select more than one answer.

Three-fourths of the respondents said that they had a say in any scheduling decisions because they are an owner/partner, independent contractor or were consulted.

The majority of the respondents (76.7 percent) were female ODs.

Time for Self-care Can Be Scarce, Poll Respondents Say

In a recent Women In Optometry Pop-up Poll, the majority of the respondents shared that their work-life balance is not evenly distributed. Approximately 15 percent...
Read more
Polls

What Do You Do Just For You?

Dr. Deborah Weston: How the Pandemic Caused Her Practice to Rethink Its Connections to Patients

No Mentor, No Problem! How to Become Self-Made in Eye Care.

By Maria Sampalis, OD, Corporate Optometry Careers You don’t need to have a family member that was or is in the eye care industry or...
Read more

Based on the responses to the 27th wave of the Jobson Coronavirus ECP Survey, most practitioners expect to finish 2021 in a much better...
Read more
Load more