Responses to Poll on Bias Range From Fear to Dismissiveness

When Women In Optometry created a Pop-up Poll to ask about whether eye care professionals have seen or heard or experienced any increase in bias—especially toward those in the Asian American Pacific Island (AAPI) community, the poll happened to be in the field at the same time that the Atlanta spa shootings occurred, in which eight people—six of them Asian or Asian American women—were killed. The WO poll drew responses that showed how this issue has become politicized, but many responses also reflected confusion and deep concern.

One female OD who responded that she is of Caucasian heritage shared this story. “My front desk coordinator is Asian, and just last week, she was verbally attacked by a patient. It took all of the staff by surprise how verbally abusive the patient was to her. They just got the patient out as quickly as they could. Afterwards, when we had time to digest what had happened, I was horrified! We sent the patient her records and asked her to find care elsewhere. We also had a discussion in our office meeting about protecting our front desk person and not letting that happen again. I never expected that to happen in my small town!”

Some additional comments from respondents are shared below the other results.

Respondents were asked if they felt that racial or ethnic biases have changed in the past year and could check all responses that applied.

Respondents wrote in options as well, with a common thread of wondering why this is being discussed or what good can come out of conversation.

“Are we making mountains out of molehills?”

“Media hysteria is creating this nonissue.”

“[Things] have changed for the negative as mainstream media is promoting division in our country and pointing out division when there is none.”

Respondents were asked whether their practice/business has introduced or plans to introduce some diversity and inclusion initiatives. Most said no, and about 11 percent of the respondents noted that no initiative is needed at their workplace. 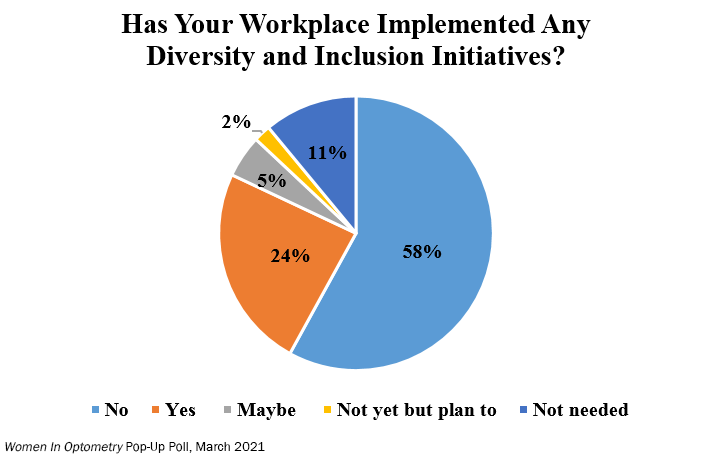 The most common type of initiative planned was conversations about awareness and creating a comfortable workplace and environment for all people, noted by 72 percent of those who planned some action. Another 47 percent said that their business or practice included a diversity hiring initiative, and 40 percent said they planned to focus on the language being used in the office. Twenty-six percent of the respondents said their business was reading/hearing or watching diversity and inclusion speakers, and 19 percent said they were working on safety measures for team members who have been targets of aggressive language or behavior.

While the vast majority of respondents said that they have not seen an increase in aggressive behavior toward people of Asian descent in their workplace, in the community, these incidents are seen somewhat more often. 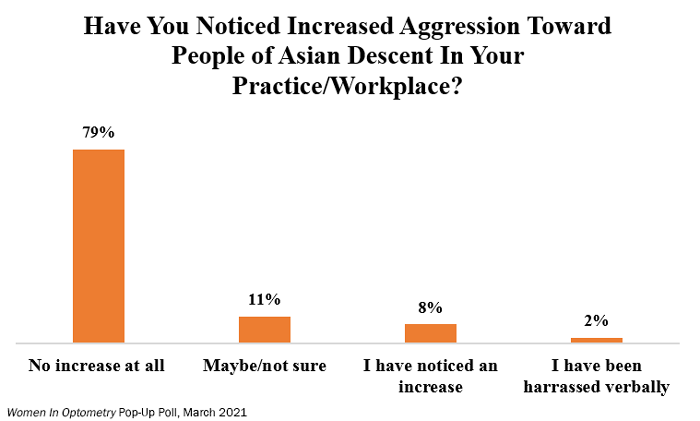 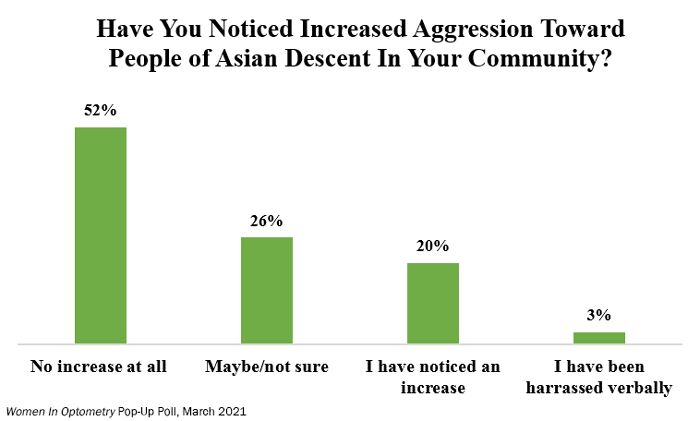 Overall, 98.5 percent of respondents said that they do not believe that Asian Americans are in some way responsible for coronavirus, but 1.5 percent said that maybe they were.

Here are some additional comments that respondents wrote in. Political and the most vitriolic responses have not been duplicated here.

“I would love for AAPI ODs to share some story about their experiences with racism and how they are working to raise awareness or combat racism. So many people are still unaware of how steeply violence against Asians has increased, whether physical or verbal or in bias.”

“My workplace is multi-heritage. Two thirds of my colleagues are of Asian heritage.”

“Why and how possibly could someone have a bias toward someone’s eyes? The concept is so foreign to me, it never crossed my mind that someone could take it that far.”

“Do the work of learning history and broaden your source of information. Stay away from opinions of facts. Take your feelings out of it and focus on what is true and logical. Even if this means your original ideas are wrong. Once I did that I became very aware of false ideas I based my view on.”

“We have never had racial problems in optical in my years. This is a false agenda.”

“The Chinese government is responsible for the spread of the virus, not the Chinese people.”

“Racism against minorities has always been there. Certain events have made racism more acceptable.”