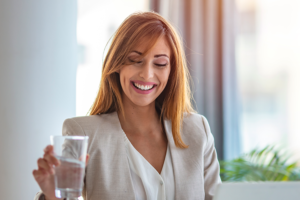 In a recent Women In Optometry Pop-up Poll, nearly 51 percent of the respondents to our “Eating on the Run” questions said that they bring lunch from home to eat while they’re at work. About 20 percent said they sometimes take a break for lunch and sometimes don’t, and 17 percent said that they routinely leave the office for a lunch break. Ordering out for lunch is the typical MO for about 6 percent of the respondents.

Finding the time to eat lunch is tricky for about 15 percent of the respondents, with some noting their lunch break is often 15 minutes or less.

Even so, a slight majority of respondents said that they are general satisfied with the way they eat and drink during the workday, with 26 percent saying they are satisfied most of the time and 29 percent saying generally satisfied, but not always. Thirty-nine percent said they are not really eating or drinking the way they would like during the workday, and five percent said they are not at all satisfied. At least one respondent said that she has begun intermittent fasting because of the results she got from skipping lunch.

Ninety-one percent of the respondents to this Pop-up Poll said they were women ODs. Here are some of the tips they shared.

“Keep healthy snacks like fresh fruit and nuts on your desk so you are not tempted to fill your hunger by grabbing from the office candy jar!”

“Meal prep is key. I prepare three days-worth of food at a time.”

“Bring a lunch from home that is packed with your favorite fruits and vegetables.”

“Hard-boiled eggs or cashews to eat on the run.”

“If you keep in-office snacks, make them balance nutritionally. I keep Greek yogurt for protein, packets of grits for iron, and hot tea with vitamin packets for little supplement boosts. It’s not perfect, but it helps when I find myself suddenly short on something.”

“I fast most of the day and have been doing this for 30 years!

“Always pack! Delivery and take out is a fast path to unhealthy habits!”

“I typically bring leftovers or salad from home.”

So many ODs have already had at least one dose of a COVID-19 vaccine. What has been your experience?
Read more
New

COVID-19 Have You Feeling Stressed? You’re Not Alone

Feeling like COVID-19's got you down? A recent Women In Optometry Pop-up Poll shows you're not alone. The majority of respondents said that their...
Read more
New

Most Eye Care Professionals Interested in Getting COVID-19 Vaccine

A Women In Optometry Pop-up Poll that was launched prior to the availability of any COVID-19 vaccines and stayed open through New Year’s Day shows that a majority of respondents were planning on (or had already gotten) a COVID-19 vaccine.
Read more
- Advertisment -

Family Business Builds on a Legacy of Caring

Talking the Talk and Walking the Walk on Pay Gap Issues

Annual salary and compensation surveys show year after year that there is a gap in reported compensation between men and women in the same profession.
Read more

Baby #1 Inspired OD to Open Her Own Practice; Expecting Baby #2 Affirms the Choice

Wilzen Anne Lingad, OD, is not slowing down, even as she prepares for the arrival for her second baby in the spring of 2021.
Read more

So many ODs have already had at least one dose of a COVID-19 vaccine. What has been your experience?
Read more
Load more

Break Out Your Halloween Costumes

Resolve to Stick With Goals