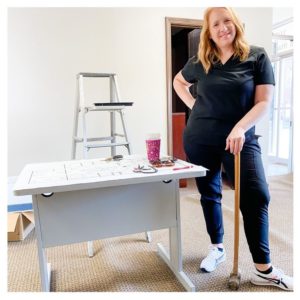 A fundamental rule contractors often tell clients is that the project could take about twice as long as anticipated. Samantha Hornberger, OD, says her project for a new office will probably come in at about three times what she planned.

The good news is that she doesn’t have a deadline to move out of her current 1,400-square foot second floor office in Lawrenceburg, Indiana. That’s where she opened Bright Family Eye Care cold in 2013.

JUMPED AT THE CHANCE

She spotted a former bank building for sale nearly a year ago, and she finalized the sale in October 2021. The lease on her current space extends until September 2023. It was a financial decision she was willing to accept because commercial buildings do not come onto the market often. Then she got lucky. The dentist downstairs is going to expand into her space when she vacates it. The challenge is that she thought that might have happened by now. 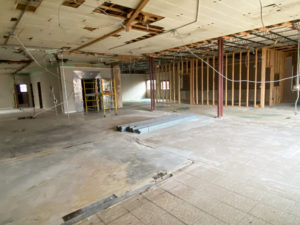 Instead, the demo took longer than expected and only now is the new framing for walls going up. In the delays, she says, she started to rethink some of the design features. Some ideas are clearly set: the new space will have five exam lanes plus a space for a dry eye suite that her technician can also use for microblading procedures.

But aspects like features of the optical dispensary and even colors have had her second-guessing. “I was thinking that I would work with blues because that is what I have in the current office,” she says. But in the remodeling, she discovered a bathroom that will be used as an employee restroom that had super-cool vintage 70s tile in green. Wanting to update rather than redo that bathroom has led her to update her Pinterest board — “I have Pinterest boards on top of Pinterest boards” – to shades of green. 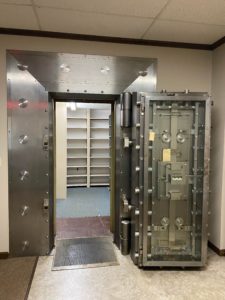 The old vault of the bank remains and will be used as a contact lens area. Unfortunately, she and the contractors could not make it work that the original vault door could be seen upon entry, but it’s still a really cool feature to have, she says.

And she feels like she wants to stand in the space that will be her optical to help decide what goes where. For one thing, being on the second floor of a building for the past nine years means she has never had street-level display windows. Yes, there are Pinterest boards for those, too.

She’s finally almost at the point where she can begin to pick out “the pretty things.” Then, as a new opening date becomes clearer, the fun will really start. 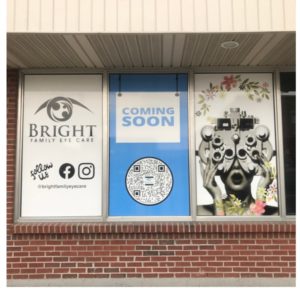