Kristel Rogers, OD, joined Bieter Eye Center in Cottage Grove, Minnesota, in 2014. She and Jeff Bieter, OD, jointly opened Vision Source Prescott in Prescott, Wisconsin, in 2017, and eventually she became an equal business partner in the main clinic. As the practices grew, the main clinic began to feel crowded. As the doctors began looking at a location just three miles down the road, the pandemic caused them to delay the move.

When they were ready to take the leap earlier in 2022, there was one last space available in the building. “We were trying to run with two doctors one day a week, but it wasn’t smooth,” Dr. Rogers says.  The practice location they were in had 2,400 square feet, but it was spread over two levels. They had already converted one of the exam lanes to a pretest room to alleviate some of the flow issues, but with only two exam lanes, it almost felt like they were moving backward, not forward, to being able to see more patients.  Patients routinely had to shift from one room to another at least two and sometimes three times before they would see the doctor. 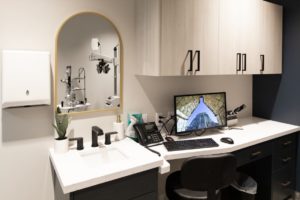 In addition, despite the longstanding history in the community, people moving into the area did not know the practice was there. “Young families didn’t know we existed; our location was so far off the beaten path and to the south,” she says. Moving just three miles to the north would put them squarely in the center of the community and the burgeoning residential areas.

The new space is inside a medical office building, surrounded by primary care, physical therapy, mental health and dental providers. The square footage is just a bit larger at 2,800 square feet, but the functionality is much improved, Dr. Rogers says. “We’re maximizing the space with cabinetry and shelving, and we are expanding from two to four exam lanes,” she says. There’s also a central charting area just at the center of the exam lanes where three people can work comfortably.

In addition to being able to see more patients and run more two-doctor days, “we wanted to create a space that told the story of who we are now and a retail space that is more inviting.” It’s a sensible space for staff, with a right-sized break room and a comfortable, personal feel.

“A lot of thought went into the architecture,” she adds. “The rounded curve for the reception desk is so attractive, and we wanted a sitting area that feels like a living room but also allows private conversation for the opticians and individuals or small groups.” The combination of natural lighting and striking light fixtures is warm and inviting.

The move also allows the practice to look more seriously toward growth. “We added digital refraction systems to two of the four exam lanes along with our already existing Marco Epic refraction workstation in the pretest area.” There are two pretest rooms separated by a sliding barn door to easily transition from one space the next.  The practice brought in the Oculus 5M Keratograph in 2020 and the  Marco Equinox Low Level Light Therapy system in December 2021 to offer further dry eye therapy in the office. With space and technology to support it, Dr. Rogers says the dry eye component of the practice is ready to take off. 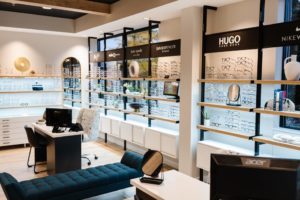 “I feel a sense of pride when I walk into the new space,” she says. “We have a created a space that is inviting to all the senses; from the way it looks, feels, sounds, and even smells. The optical features a wonderful selection of frames and great décor pieces that make the collections pop. It’s exactly what I had envisioned.”

By Lauretta Justin, OD, Founder and CEO of Optometry Divas This Thanksgiving, you’ll gather around the table and tell your friends and family that you...
Read more
Practice Designs

Ashala Mah, OD, says that while she always had a goal of practice ownership, she fell into a comfortable rut working as an associate...
Read more
- Advertisment -