After Aimée McBride, OD, graduated as valedictorian from University of Alabama Birmingham School of Optometry in 2012, she and her husband knew that they wanted to settle in a small town in the Southeast. They found Waynesville, North Carolina, a gateway to the Appalachian Mountains. She met an OD owner of a long-established practice on the downtown’s main street and was looking to transition out of ownership.

Dr. McBride worked with him for several years, and when he retired in 2014, she became the owner of Haywood Family Eye. “I worked by myself for about two years, with my husband, a computer engineer, serving as my practice manager,” she says. But the area – and her family – grew. The couple now has three boys and the practice was getting busier. So she called a classmate, Thomas Pinkston, OD, with whom she had done a rotation in Tuscaloosa, an hour or so away from the optometry school. They drove together for that rotation, “and I got to know him as a really good guy. He and his wife were living in Atlanta, and they were interested in small-town living, too.”

He joined her and became a co-owner in 2017. Even with the pandemic, the practice continued to grow, and the pair brought on an associate. Finally, they realized that as much as they loved their historic downtown location, they could not accommodate their growing patient base there. “The parking downtown had become an issue. A lot of our patients simply cannot park three blocks away and walk here,” she says. Plus, with three doctors and a staff of 15, it was crowded. 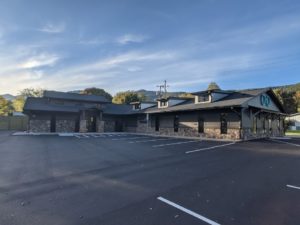 “It took a long time to find the right location. We kept looking at the buildings for sale that had adequate parking,” she says. They did find a building, a nondescript 1980s office, and they let the idea sit for several months before they leapt. They updated the look of the outside with stone and dark wood, but kept the footprint as it was. “We repainted everything and redesigned the flow. We went from having a cramped optical with 8-foot ceilings to one with soaring 13-foot ceilings,” she says. Although the practice did expand its frame inventory – from about 640 to 900 – the expanded space allows them to give more display space to the frames they have. Natural light, track lighting and a stunning chandelier create a welcoming look. Patients and staff enjoy the experience so much more, she says.

She had some ideas for the décor, but she turned to architects who specialize in optometric spaces to design the plans for the renovation.

Moving around is so much easier. The practice now has eight exam lanes, compared to four previously. “If we wanted to, all three doctors could work at once, but it’s usually two at a time,” she says. That schedule suits her because it allows her the administrative time she needs to plan for the practice growth.

The practice benefits from having relatively few competitors but that also means that the owners are unlikely to find staff members who have optical experience. “Working in a small town is wonderful, but you have to be willing to train your technicians and optical staff. And it’s important to select doctors who really want to live in a small town where you know your patients and see them at church, school and community events,” she says.

This kind of setting also appeals to optometrists who want to practice a full scope of optometry. When she acquired the practice, the previous doctor had added an OCT and an electronic medical records system. “We added a Marco automated refraction syste, Optos technology and a topographer. We do have a general ophthalmologist 15 minutes away and a glaucoma specialist is 45 minutes away, but it’s important that we are able to do as much as we can for patients here,” she says.

Work Where You Want to Live