When Ann Feidler-Klein, OD, accompanied her ophthalmologist father to the hospital during her childhood years, she was amazed at his ability to treat people in distress. “I wanted to be part of that patient care journey,” she says about the passion that led her to become an optometrist about 23 years ago.

After graduating from the University of Houston College of Optometry in 1999, she had a variety of job opportunities, but her father reached out with a proposal. “He was interested in changing his MD practice into an OD/MD clinic and asked if Jeff and I wanted to join him,” she says. With the desire to move back to her hometown and learn practice management skills, she and her husband Jeff Klein, OD, packed up their bags to join Feidler Eye Clinic in Norfolk, Nebraska.

Working with her father taught the couple many aspects of running the business. “We learned a lot from him and formed a solid grasp of what we wanted in our own space in the future,” she says. The practice was also growing at a rapid rate, and soon it was running out of space.

When her father decided to slow down, ownership was gradually transferred to Dr. Feidler-Klein (“Dr. Ann”) and her husband. It seemed like a good idea to carry out the next step of a planned expansion. The couple purchased land located a block away from the original location. “It worked out perfectly. We wanted to stay in the same neighborhood so that patients could find us easily and so it would be easier for us to keep our eyes on both places while we were building,” she says. Remodeling the old office was not a feasible option because it would force a months-long shutdown, a risky move that could result in losing patients and presence within the community. 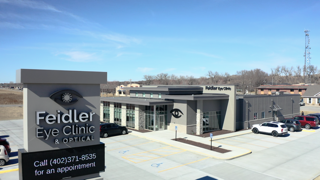 Since they were building the practice from the ground up, Dr. Ann wanted ample time for planning.  Dr. Ann and Dr. Klein spent two years planning and designing their new clinic.  She felt ready to start the building process just as the COVID-19 pandemic hit and put everything on hold. They debated whether or not to start construction during a pandemic.  Ultimately, after waiting six months, they felt it was the right thing to do to continue to grow their practice.

Even after construction began, there were some delays with construction teams and supply chain issues, but it went relatively smoothly. “We were aware of these hiccups so we tried to keep ahead of the game by ordering tiles, carpet, equipment, appliances and more much earlier than what would normally be required.  Most everything was ready to go once the building was finished, and that helped us finish nearly on time,” she says.

In November 2021, the empty plot was transformed into a spacious 8,000-square-foot space with eight exam rooms, two pretesting rooms, a procedure room for their ophthalmologist, optical lab, dry eye and contact lens suites, and a large staff break room. The floor plan is big enough to accompany new and current patients, the addition of an associate OD and an ophthalmologist who comes in to perform cataract surgeries.

PIECING THE PUZZLE TOGETHER 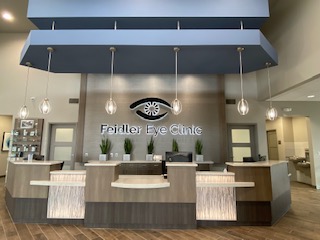 “I envisioned the space as a tranquil and inviting area, not trendy but also not overly clinical or sterile,” Dr. Feidler-Klein says. Most of the walls are painted in a light taupe color, but the reception desk is soft slate blue and gray tones, so patients are drawn to that area. The overall bright and neutral colors balance well with the natural sunlight that comes in through the windows, especially in the optical and reception area.

She also installed a simple flooring and carpet pattern throughout the practice to prevent patients from feeling overwhelmed by the design. “We’ve gotten a lot of positive feedback from our patients and staff who comment on the peacefulness and spaciousness,” Dr. Feidler-Klein says.

Coordinating the furniture in a large space was a task in itself, she says. She wanted the same design for the counter and cabinet laminates. In the end, she settled for a light gray marble laminate that she applied for the counters and tables in the optical area. It adds a modern touch while retaining the tranquil atmosphere, she says.

The eyewear displays are versatile.  For now, they are placed on a mix of frame board rods and open shelves based on brand. Dr. Feidler-Klein plans to install more shelving in the future to diversify the shopping experience for her patients.

“This new facility allows me to continue and expand my father’s legacy of first-class eye care to the people of Northeast Nebraska for decades to come,” Dr. Feidler-Klein says.

Cold-start Practice is Worth the Wait