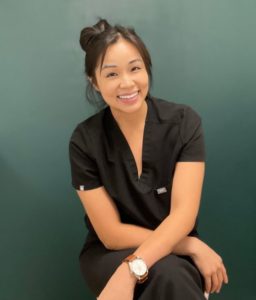 In May 2022, Amy Kasper, OD, closed the doors to The Vision Studio in Cary, North Carolina, for a week-long remodel. Renovating the space was an opportunity to truly make the office her own after purchasing the practice in January 2019. The business had long-time roots in the area; the former owner founded the practice more than 40 years ago. Her vision for patient care aligned with the practice founder, yet the office—where he moved into in 2001—needed a refresh from the orange textured wallpaper to the hunter green highlights.

WHEN THE TIME WAS RIGHT

Dr. Kasper had originally planned to renovate a year after buying the practice, but the COVID-19 pandemic put a halt on those plans. “I had the idea and vision, but it was all about the right timing.” As time passed, she says that she realized it was now or never to move forward. She wanted a boutique theme, and she studied the styles used in spas and boutique shops to create her light and airy atmosphere. She created a Pinterest board full of her ideas that she brought to life in the space.

While Dr. Kasper had hoped she could knock down some walls to extend her lab space, the work involved changes in coding that would have required more time and funding than she wanted to spend. The focus was on taking out old wallpaper, countertops, flooring, cabinets and most of the frame boards. “With cabinets, staff will fill it up and we will end up saving stuff we don’t need.” She wanted the new look to be minimalistic and clean. 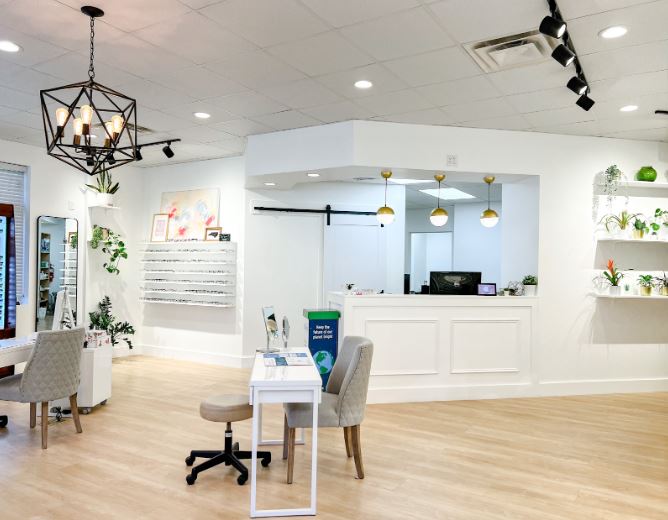 The renovation was planned for a week, and Dr. Kasper admits that she had her doubts that the project would be done in time after the first demo day. But her contractor stayed on target with the 10-day timeline, which included two weekends, and the construction team worked around the clock to get it done. By day 8, it was time to move everything back in and finalize the space for patients on Monday morning. 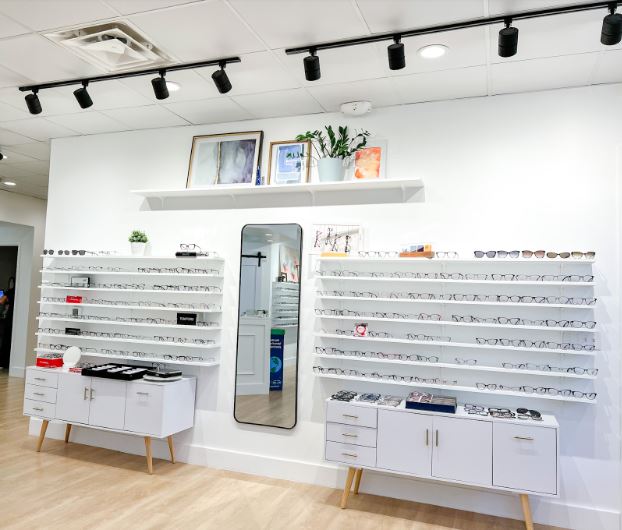 The renovated space is primarily white from the walls to the floating shelving and new frame displays, with some accents in green from the many plants on display and black from the track lighting and other fixtures. But the real star of the show? The frames. “My contractor kept telling me I needed more color, but I told him, ‘The frames will be the color,’” she recalls. “The frames stand out on their own and speak for themselves.” She offers a variety of high-end frame styles and has expanded upon what the former owner offered with the additions of Tom Ford and Mont Blanc. There’s a mix of quirky and conservative choices to match her patient base, which includes many working professionals as well as children for myopia management and retirees. 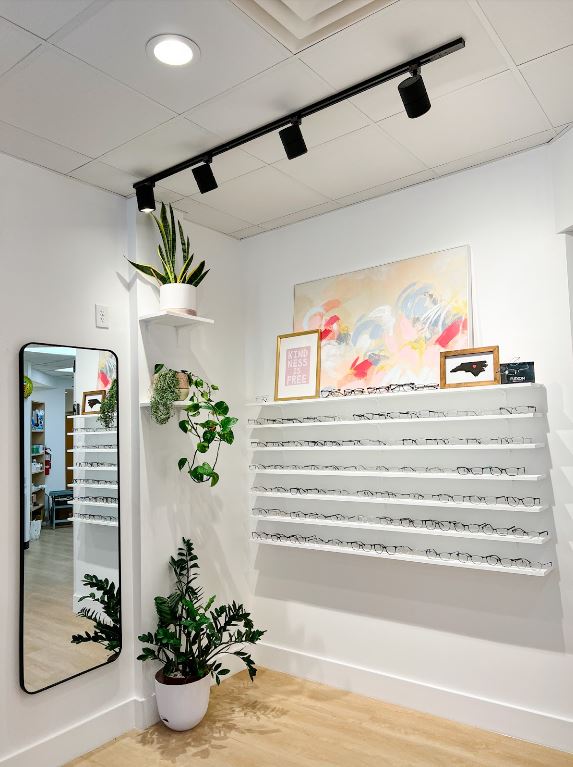 Dr. Kasper looks forward to continuing her myopia management work; the former owner of the practice was on the forefront of this care in the early 2000s, and she decided to get certified to continue serving this patient base. “I did my research, and I love it,” she says. “It’s so interesting to see how myopia control has blown up since I started 5 years ago; I am glad I stuck with it.”

In her renovated space, she also hopes to grow her scleral lens fitting demographic of patients, better serve her dry eye sufferers with the recent addition of the Lumenis OptiLight IPL and ultimately transform a separate exam room to offer more aesthetic services. She has an associate OD who will be with her for one more year until his wife finishes a program at Duke University, and she says that having another doctor on board has helped her grow and manage the patient base.

The timing of Dr. Kasper’s renovations, making her mark on her office space, comes at an important milestone: her 10-year anniversary since her graduation from The Ohio State University College of Optometry. Dr. Kasper reflected on a path she did not expect over this decade. “If you talked to my classmates from school, I think that they would be shocked that I bought a practice,” she says. “I didn’t show interest in ownership. I wanted to be in private practice, but I wanted to go to work and leave the responsibilities there in the office.” 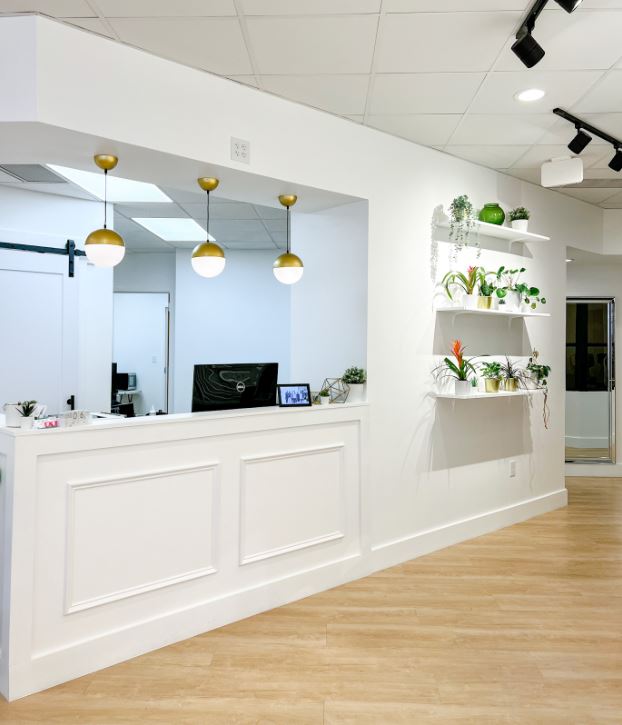 After optometry school, Dr. Kasper and her husband relocated to Fort Bragg in North Carolina, as he was serving in the army. She worked in all types of modalities while she was there: corporate, owned a sublease, and worked as an associate and a contractor. “It gave me insight into each kind of practice and how different it could be.” Then, Dr. Kasper’s husband was deployed, her daughter was born and she split her time between two private offices. This closer glimpse at private practice ownership showed her that it could be a possibility. “I realized it was the most flexible position I had worked in.”

They moved their family to Cary, North Carolina, after her husband completed his time with the Army. Dr. Kasper came across a classified ad for a doctor selling his practice. “Our vision for patient care was very much aligned,” she recalls. “He didn’t want to sell to corporate, and he wanted his practice and patients taken care of.”

The transfer of ownership and transition was well planned with a clear onboarding and exit strategy and ran smoothly, she says. “We had the same idea; he would work part-time so that I could get to know the patients.” After she became owner in January 2019, he stayed on the team for about a year. “It made it a little easier for the patients.”

Dr. Kasper encourages her female colleagues to consider practice ownership during a time where corporate offices and private equity are growing exponentially. “I felt that it would be hard to be present at home while being a business owner, and because of my faulty beliefs of what ownership would be, I closed off the idea of ownership,” she says. “It’s important to know that women can have it all—a successful career and family. And not only is it possible, it’s the most flexible and fulfilling position I’ve had.”

At the 10-year anniversary celebration of Bella Eye Care in August 2021, Judy Nguyen, OD, recalls guests telling her that they would love it...
Read more
Practice Designs

As Jamie Kuzniar, OD, FAAO, FSLS, spent the past five years practicing in the metro Detroit area, she says that it became clear that...
Read more
- Advertisment -

Postponing Relocation for a Decade Proves to be Smart Move