When One Business Venture Leads To Two More 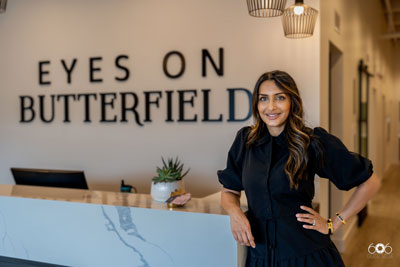 Hina N. Patel, OD, FAAO, was impacted by the profession from an early age. She was diagnosed with a congenital cataract at just four years old, had cataract surgery and was in and out of the optometrist’s office during her younger years for follow ups and vision therapy. While she started her college studies majoring in business, she started working for an optometry office to see it was the right fit. Ultimately, she shifted her focus to take her prerequisites for optometry school. “I loved the job, and I could help people,” fitting in her love of both business and science in one career.

Following her 2010 graduation from Nova Southeastern College of Optometry, Dr. Patel spent a year in residency with Bascom Palmer learning about ocular disease before working in an emergency center owned by an OD. “It was a unique setting where we only did ocular disease and emergencies only, and the doctor employed glaucoma, retina and cornea ophthalmologists,” she says. She also had the opportunity to work with fourth-year students who rotated through the site.

Then Dr. Patel spent the next few years in an ophthalmology office, specializing in post-cataract and post-refractive care, as well as ocular emergencies, so the MD could focus on surgery. In 2016, when she became a mom, she moved to a more flexible position in a retail setting with a predictable schedule. She says that position taught her a lot about looking for key performance indicators, how to grow an office, business trends and how to keep employees happy and engaged. Yet the day-to-day work became mundane and monotonous. “I wanted a broader scope of practice with medical care instead of referring out because I couldn’t do it all there,” she says. “If not for that job, I might not have had that spark of wanting to own a practice and that entrepreneurial spirit.”

Dr. Patel says that she and her husband thought they were done having kids, and with their two young children now toddlers, she felt ready to tackle a practice of her own. She heard about iCare Advisors from her colleagues, and she says that without having this team consulting her, she would not have had the courage and confidence to go out on her own from being a cheerleader when she felt the finances were too much to handle to the real estate analysis and much more.

She started considering how she would become a business owner. First, she thought a great fit would be taking on a lease with a Costco or Target, yet since these businesses in Illinois can hire their own ODs, there are not many leasing opportunities. She also considered purchasing a practice from a retiring OD, but in the end, she felt she would rather lay her own systems in place than try to change the routine of a well-established office.

THE SEARCH FOR A SPACE 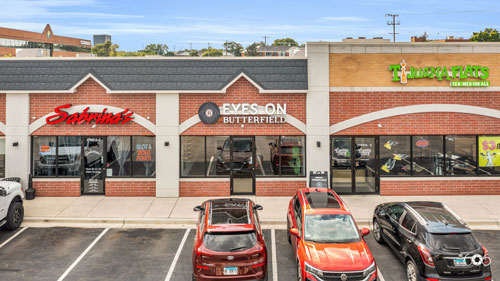 The Chicago area, which is home to two optometry schools, has many ODs in the area, so she says that made the task of finding the perfect place to open a bit daunting. Two priorities were being close to home but also in a place where there was a need for care.

As she narrowed her search, her well-laid plans went a bit off track. In October 2021, Dr. Patel says she found out she was expecting her third child. In November, she signed the papers to secure a space for Eyes on Butterfield, her private practice. And in December, she was offered a Target lease position that she couldn’t pass up. She accepted the opportunity, while still moving ahead with her private practice. 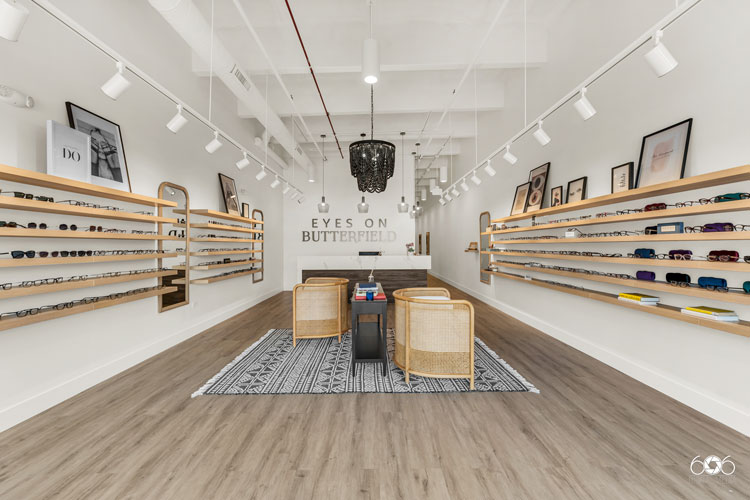 The space she chose for Eyes on Butterfield is just 10 minutes from home in Oakbrook Terrace, Illinois, a suburb of Chicago. It’s a family-oriented community with a range of potential patients from pediatrics to geriatrics. Located at a busy intersection, Dr. Patel says that many patients tell her they decided to stop in because they saw the office when they were driving by. There’s foot traffic, too, from the popular Sam’s Donuts at the end of the strip center, as families visit on the weekends and notice the beautiful space. She says that she pays more for that visibility, but it’s been a worthwhile investment.

The office is 1,400 square feet, and the design is boho chic and minimalistic. “I like black, modern, homey and clean. I wanted it to reflect my style and not feel like a sterile doctor’s office,” Dr. Patel says. “As much as I want to be more medical, part of our job is retail presentation: the way you dress, the way your office looks and what styles. It helps patients when they see the office and they know that they can turn to the doctor for styling advice.” The eyewear in the practice is competitively priced with online options, and she’s offering a variety of package options as well as high-end designer styles. 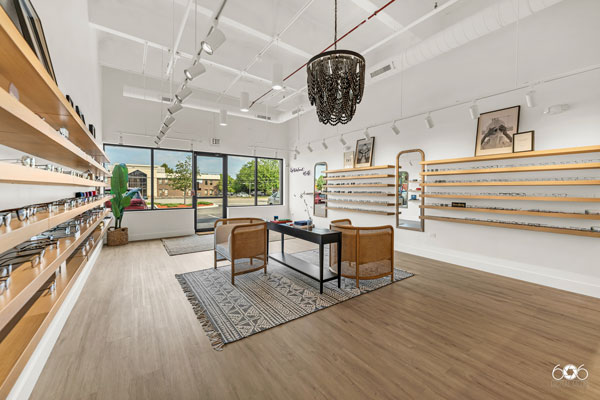 She started off with Optos technology for its wow factor and the ability to offer it to every primary care patient as she builds the business. As she grows, she plans to add an OCT. 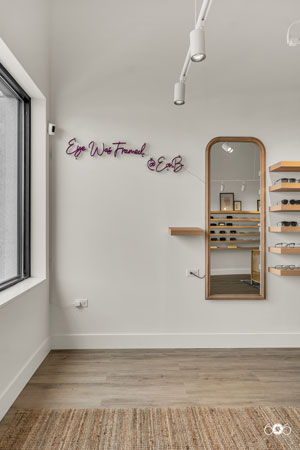 Dr. Patel planned to open Eyes on Butterfield in March 2022, but construction delays left her to open in May—just two weeks before her son was born. She recalls sitting in her hospital bed on her cell phone, making future appointments. Around that time, she also received an offer to take on another lease that’s two miles from the practice. That office will open in January 2023, and she sees great opportunity in it as a referral source to the private practice for medical care. She also can equip the Target leases with better instrumentation when she upgrades in her private office.

By the summer, Dr. Patel was ready to add to her teams. She hired a full-time doctor to cover her Target hours and has hired a part-time employee to join her at Eyes on Butterfield. Thanks to her connections in the community—through the school PTO, sponsoring local events, membership with the Elmhurst Indian Association, introducing herself to local business owners—has helped drum up business in the early months. “I’ve had a few business owners stop by because they know my practice is owned by another woman,” she says. “It’s taught me to shop local more often. It’s easy to buy something from Amazon, but you feel so much better when you can give a present you really thought about.”

It’s been a rollercoaster ride for the past few months, and Dr. Patel expects that to continue as she finds a balance between her new work life and her growing family. She’s currently seeing patients on Monday, Wednesday, Friday and Saturday, and she spends Tuesday and Thursday on the administrative sides of her businesses. 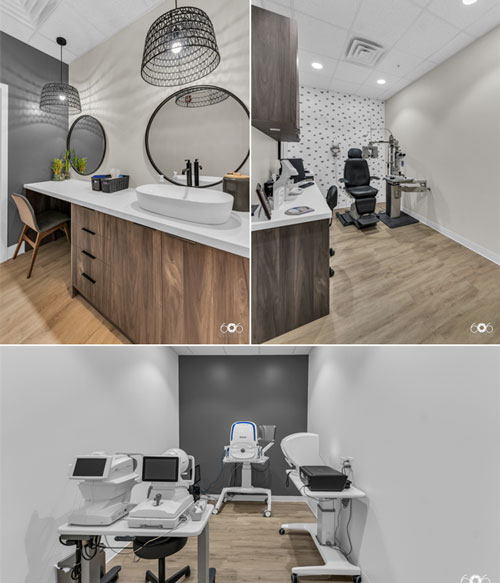 By Lauretta Justin, OD, Founder and CEO of Optometry Divas This Thanksgiving, you’ll gather around the table and tell your friends and family that you...
Read more
Practice Designs

Ashala Mah, OD, says that while she always had a goal of practice ownership, she fell into a comfortable rut working as an associate...
Read more
- Advertisment -

7 Easy Ways to Say Thank You to Your Patients This...

Many Small Actions Make a Big Impact Over Time