Mother and daughter both created practices around vision therapy focus

This story was originally published in our March 2011 issue.

Brenda Montecalvo, OD, of Beavercreek, Ohio, laughs when she recalls her first meeting with a male OD. She was just five years old, but remembers thinking that “there was something wrong with him. It was different for me,” she says. That’s because just downstairs in her Seymour, Wis., home she could find her mom, Marilyn Heinke, OD, at work. Dr. Heinke was one of three women in her optometry school graduating class in 1945, and the lower level of their house was her mother’s optometry office—the same practice where Dr. Heinke still works today.

From her childhood on, Dr. Montecalvo spent years dabbling in all areas of her mom’s practice, including secretarial work, bookkeeping, pretesting and vision therapy. She remembers those patients the most. “It was really exciting to see kids who were failing turn into A students or see a student who has been a patient since second grade go off to college,” Dr. Montecalvo says. Dr. Heinke also traveled around the state, lecturing to school districts and spreading the word about vision therapy. “My mom had the mantra, ‘If we knew enough, we would know how to solve the problem.’”

While she enjoyed the work, she didn’t see herself following her mother into practice. That came only after conversations with her mother’s optometric colleagues, especially another doctor who provided vision therapy. “Sometimes you want to listen to others more than your own parents,” Dr. Montecalvo says. She switched her emphasis from political science to optometry after all, transferring to Pacific University to finish her undergraduate degree and for optometry school. She graduated in 1985, married her husband, Anthony, a military F-16 pilot. Until 1991, the couple moved often, living in Spain, Florida and Ohio.

Twenty years ago, she gathered up a lifetime of advice and experience and opened a practice in Beavercreek specializing in vision therapy. It took off. “I was out of the red and making a profit in three months, and I was debt-free in nine months,” she says. “My mom had good results with vision therapy, so I knew I could do it offering a different service than others in the area. It’s so important to have knowledge of how a business is run.”

Five years into practice ownership, Dr. Montecalvo merged her practice with two other offices. The combined, three-OD practice, Nova Vision Care, in a new 7,000-square-foot office, offers many more specialties and services than she could have managed alone. Her vision therapy focus meshes well with one doctor’s glaucoma work and the other’s low vision and orthokeratology interests. “I’m blessed with good partners and good communication,” she says. “We share the responsibilities, and we have a nice blend.”

Dr. Montecalvo admires and imitates her mother’s combination of work and family life. While she couldn’t replicate the home above the office, she has been able to establish working hours that let her meet her income goals in just 20 hours a week. “If you are good enough, you can pick your hours,” she says. “This allows me to do both—work and raise a family.” Her son Andrew is an engineering student, while her college-age daughter Clarice and high school junior Natalie are both considering optometry among their career choices. 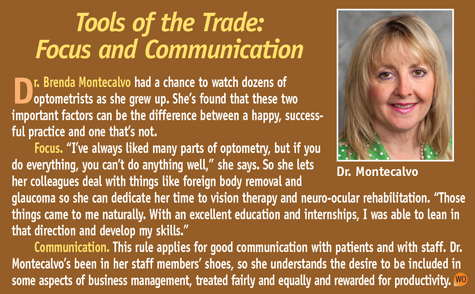 Holistic Eye Care: How to Get Started with Your Patients

OD’s Personal Decision for a Toric ICL Influences Her Conversations

By Christine Smith, OD—Through my work co-managing refractive surgery patients, I expanded my knowledge about the procedures and options that exist and started seriously considering what path might be best for me.
Read more
- Advertisment -