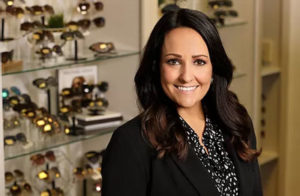 Pediatric care has always been near and dear to the heart of Ashley S. Reddell, OD, FCOVD. After graduating from Southern College of Optometry, she completed a residency in pediatrics and vision therapy at SCO. Now, she and her husband, Jonathan Reddell, OD, are the practice owners of Family Eyecare Center and Family Eyecare Kids in Leavenworth, Kansas, a 30-year-old practice they acquired in January 2020, just before the pandemic awareness hit.

The pandemic proved to be an ideal time to build out space and add a pediatrics clinic. The building was large enough to accommodate another two exam lanes and a kids’ optical as part of an expansion. Dr. Ashley, as she’s called, appreciates now having a more designated space for these young patients. 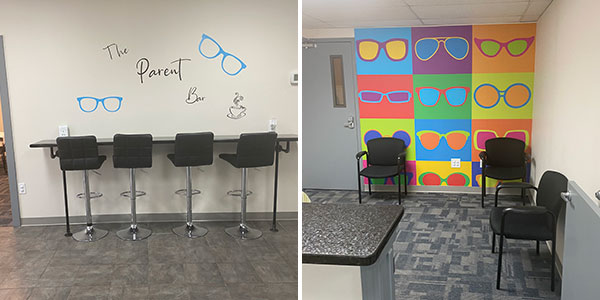 Expanding during a pandemic made good business sense. First, the doctors realized that even when the distancing restrictions were lifted, many patients would still be a bit wary about being crowded together. By separating the youngest patients—who are not eligible to receive vaccines yet—from the older patients, the doctors helped assuage some of their patients’ fears. They also realized that when the practice was ready to reopen to routine care, there would be a backlog of patients. Adding two exam lanes (and in July, a sixth doctor) to their four-location practice would allow them to accommodate more patients more quickly.

To help bring more attention to the news kids’ space, the doctors were inspired by a local donut shop with a unique trait. “The shop had a beautiful mural; it was eye-catching,” says Dr. Ashley. “I wondered if we could do something like that.” 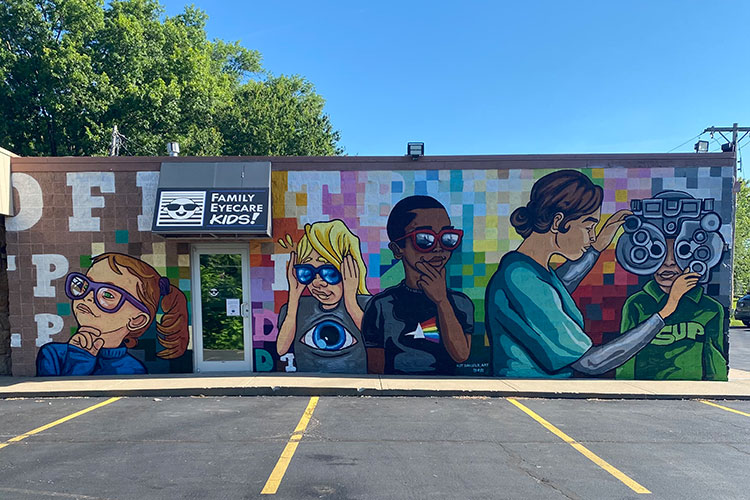 Their building has been the location of many different kinds of businesses. “Our building is large, and it’s been a million things,” she says. One part of the exterior is stone and another is brick; a mural on the brick section could create an interesting and more unified presentation. They contacted the donut shop muralist and got started. Ultimately, painting the mural took the artist only three days and was completed in early summer. The bright and colorful mural depicts multicultural, bespectacled children and an OD performing an exam.

Inside, Family Eyecare Kids has its own entrance and reception area, its own optical and a bar that serves up Capri Suns for toy coins children can earn. The family practice and kids’ location are also connected by an interior hallway. 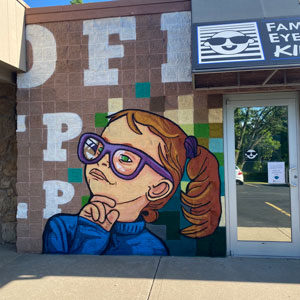 The mural ended up being the final touch for the practice’s expansion and a great attraction. In this military community near the U.S. Army’s Fort Leavenworth, turnover is high—but the practice is the primary destination for children who need eye care.

She’s hopeful that the mural will become a kind of destination spot as a background for photos. She and the staff encourage their young patients to snap a photo of themselves with their new eyewear in front of the wall—and with a strong hashtag, she is hopeful it will become an additional marketing tool for the practice.

Facebook
Twitter
Pinterest
WhatsApp
Previous articleMost are Keeping Masks in Place for Doctors and Staff, Often for Patients, As Well
Next articleLook on the Bright Side

It was a “blessing in disguise” that landed Zuriany Olive, OD, in her own practice. After graduating from Nova Southeastern University College of Optometry...
Read more
New

Service-oriented OD Makes a Mark on Her Community

When a Wall Says Welcome

Starting From Scratch Is the Best Recipe for Doctor and Baker

Those Are Some Cool Glasses