A recent Women In Optometry Pop-Up Poll asked respondents if their vaccination status is any of their patients’ business.

It is not uncommon for patients to ask doctors or practice staff about the vaccination status of the team. Indeed, more than half of the respondents (53 percent) to a recent Women In Optometry Pop-up Poll said that they are getting this question “once in a while” and 12 percent said they are asked “quite often.” More than a quarter (28 percent)  said that patients do not or rarely ask about vaccination status.

Overall, two-thirds of the respondents, 66 percent, said that they volunteer their own vaccination status if asked. Indeed, some use it as a marketing tool. One male OD responded, “I have my vaccination card blown up and attached to the wall so anyone can see it.” One female OD wrote, “We are very forthcoming about our complete office vaccination status and promote it.”

While 75 percent of the male OD respondents said that they volunteer their own vaccination status – and many said they promote that of the entire staff — slightly fewer (69 percent of women ODs) said the same. 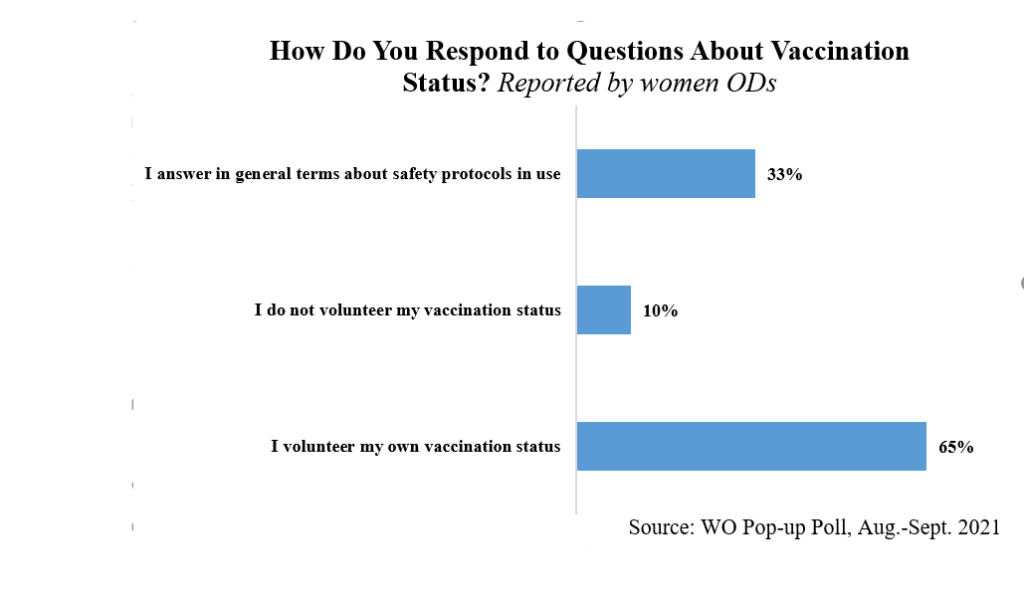 CONVERSATIONS IN THE EXAM ROOM

Yes, in hopes that I can encourage/answer their questions. (83 responses)

No, I do not want to open the door to that discussion. (71 responses)

Yes, that information is relevant. (63 responses)

A number of doctors wrote in, saying that if they need to ask the patient to remove his or her mask, that may cause them to ask about vaccination status. Others are trying to figure out the best way to approach it. As one female OD wrote, “I’ve been unsure if it is something that I should be asking and documenting. I’m in neuro-rehab and I’ve seen some patients with neurological fallout after having COVID.”

On this and other forums, some ODs express frustration with patients’ reluctance or even refusal to wear a mask. One male OD wrote, “I ask all my patients if they have been vaccinated; one patient thought it was none of my business and wanted to report me to some agency, whatever that might be, for asking. I believe it is like asking about any medications that they are taking or any medical conditions that they may have. Also, I feel such knowledge is for protection for me, my staff and any other patients that stop in. So, I am disgusted with such ridiculousness and so I am releasing this patient from my practice.”

Overall, nearly 72 percent of the respondents to the poll said they are fully vaccinated, with 18 percent saying they are not and 7 percent preferring not to answer that question. 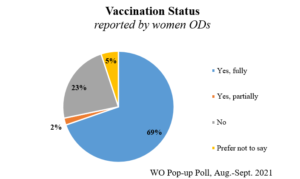 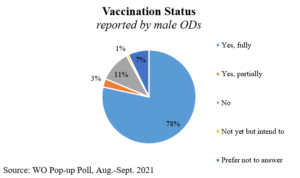 A majority of respondents were female ODs (50.9 percent), and 34.6 percent were male ODs.

Heather Day, OD, has been providing her hometown of Statesville, North Carolina, with eye care for more than 16 years. She always wanted to...
Read more
The McGee Group

The back-to-school lineup from The McGee Group features a host of kids’ eyewear made up of new releases from Vera Bradley and Life is...
Read more
Luxottica Branded Practices

Online and Print Journals are Top Sources of Professional Information